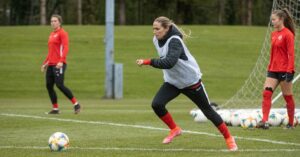 Canada Soccer’s Women’s National Team will continue their preparations for this summer’s Olympic Games with a pair of April international friendly matches in Wales and England. Canada are looking forward to two tough matches that will help them continue to build on the progress made at the recent SheBelieves Cup.

Up first is the Wales-Canada match on Friday 9 April in Cardiff, Wales with a live broadcast on OneSoccer’s YoutTube channel (18.00 local / 13.00 ET / 10.00 PT). The second match is England-Canada on 13 April, also scheduled during the FIFA Women’s International Match Calendar. Throughout the April window, Canadian fans will find extended coverage across Canada Soccer’s digital channels on Facebook, YouTube, Instagram, and Twitter featuring the social media hashtag #CANWNT.

“We will use this as an opportunity to continue to build on the progress made in the 2021 SheBelieves Cup, with a greater emphasis on partnerships and chemistry as we move closer to the Olympic Games, given we now have key players available,” said Bev Priestman, Canada Soccer’s Women’s National Team Head Coach. “I think we can’t underestimate Wales. They have players playing week in week out in the Women’s Super League in England. They are a difficult team to break down, and it’s going to offer us the opportunity to experience a certain style of play, which will only help up in our preparation for Tokyo 2020.”

Canada Soccer’s Women’s National Team has only faced Wales once in the history of the program, on 3 March 2002 at the Algarve Cup in Portugal. Canada won the match 4:0, with teens Christine Sinclair and Kara Lang both scoring two goals each.

“They are a very proud nation, so we are expecting a fight,” said Canada’s captain Christine Sinclair. “I know for me, personally, it’s been a long time since I played for Canada (before the pandemic in March 2020). I feel like a little kid, I’m excited to get back out there with my teammates and my friends, and to start my road to the Tokyo Olympics.”

After the match against Wales, Canada will travel to England for their second Women’s International Friendly match. They will face England at Stoke-on-Trent on Tuesday 13 April at 19:15 local (14:15 ET / 11:15 PT).

Canada Soccer’s Women’s National Team returned to the pitch last month when they took part in the sixth edition of the SheBelieves Cup in Orlando, FL, USA with matches against USA, Argentina, and Brazil.  Head Coach Bev Priestman registered her first victory as Head Coach with the 1:0 win over Argentina.