Canada defeated away as hosts Mexico win 2:1 in opening match of November series 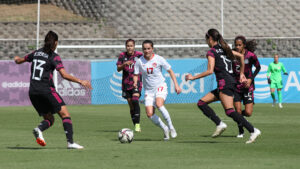 Despite a late push, Olympic champions Canada lost the opening match of a Women’s International Friendly series against the hosts Mexico who held out for a 2:1 victory at the Mexican National Teams training centre in Mexico City. Mexico scored goals in each half, the first on a penalty, before Jordyn Huitema cut the lead in half and then Canada pushed the hosts on their heels without an equaliser.

Both Victoria Pickett and Player of the Match Cloé Lacasse made their debuts for Canada while Marie Levasseur and substitute Sura Yekka returned to the Women’s National Team lineup for the first time since 2017 and 2015, respectively. For the 20-year old Huitema, it was her first goal of the season and 14th of her Women’s National Team career.

“I thought first half we tried a new system with some new faces, and I loved our response in the second half. It was the Canada that I know that will take it to the opposition,” said Bev Priestman, Canada Soccer’s Women’s National Team Head Coach. “Overall, in the grand scheme of things it is a loss and we never want to lose, but at the same time we are moving forward in terms of tactics and faces despite having a depleted squad. What I liked is the response and that is the Canada response with that mindset and that resilience. We have to keep moving forward and taking games to opposition. What I saw second half is what I would like to see going into our second game.”

The Saturday morning match was the first of back-to-back Women’s International Friendly matches against Mexico in Mexico. The second match on Tuesday evening will be broadcast live on OneSoccer including OneSoccer.ca, Fubo.tv and Telus channel 980.

“We knew we would have a tough opponent today,” said Lacasse who came in as a substitute in the second half. “We tried a different formation in the first half and were learning different things with new players. It was my debut and I am really excited to represent Canada for the first time. Next time I hope we get the result we want.”

“Everyone who came into the second half was just trying to bring some energy,” said Huitema. “We were on top of them for a lot of the second half and we could have made it even more and came back and tied or won the game. There is a lot of learning that we can take from this first game to work out those fine details as we prepare for the FIFA World Cup Qualifiers and it is about going along with the process.”

MATCH REPORT:
The first attempt of the match came to Canada from a corner kick. Vanessa Gilles was first to it, but her header went just wide of the post (8’). In the 13’, Canadian goalkeeper Kailen Sheridan was called into action for the first time to make a routine save on a low shot.

Mexico was awarded a penalty in the 18’ as Gilles collided with Mexico’s Diana Garcia in the box. Stephany Mayor stepped up to take the penalty kick and put it past Sheridan to give the home side a 1:0 lead (19’).

In the 30’, Marie Levasseur played a pass into space down the line for Nichelle Prince who used her pace to take the ball away from a defender and cut towards the goal. Her final pass into the box was blocked and cleared by the Mexican defence.

In the 38’, Allysha Chapman made a lovely give and go with Levasseur, but Chapman couldn’t pick out a teammate with her final cross into the box. A second ball played in from the other side found the head of Christine Sinclair, but the attempt was easily saved by the Mexican goalkeeper Itzel González.

Player of the Match Lacasse entered the match in the 61’ to make her Women’s National Team debut.

Mexico doubled the lead in the 76’. A free kick was played into the Canadian penalty area and although Sheridan was able to make a great first save, the rebound popped up to the on-rushing Alicia Cervantes who had a tap-in header to make it 2:0.

Lacasse had an opportunity to score on her debut in the 80’, as she was played through into the box and found herself one-on-one with the Mexico goalkeeper, who was able to make a strong save to deny the Canadian.

Canada pulled one back in the 86’. Quinn was able to take three touches before playing a chipped cross into the middle of the box. The first header popped up and Jordyn Huitema was there to follow it up and place the ball in the bottom left corner, making it 2:1 (86’).

Canada put more and more pressure on the Mexican side in the final five minutes of the match as they sought the equalizer.

In the 89’, Sophie Schmidt played a ball over the top of the Mexican defence and into the path of Deanne Rose, creating a two-on-one Canadian attack. Rose elected to play a hard, square pass to Lacasse who was all alone on the other side of the goal, but there was just too much pace on the pass and Lacasse wasn’t able to keep her shot down.

In the fourth minute of added time, Chapman’s pass into the box somehow managed to find the feet of Schmidt who had enough space to take a quick touch and get a clear shot away. A great save by the Mexico keeper prevented the Canadians from tying the score. The ball bounced around in a dangerous area before a Huitema header was finally caught and controlled by the keeper (90+4’).

Canada’s starting XI featured Kailen Sheridan in goal, Kadeisha Buchanan at right back, Vanessa Gilles at centre back, Allysha Chapman at left back, and Desiree Scott, Victoria Pickett, Marie Levasseur, Julia Grosso, Nichelle Prince, Jessie Fleming and Christine Sinclair from the midfield up through to the attack. In the second half, coach Bev Priestman replaced Pickett with Sura Yekka (46’), Sinclair with Jordyn Huitema (46’), Scott with Quinn (60’), Levasseur with Cloé Lacasse (60’), Prince with Deanne Rose (60’), and Grosso with Sophie Schmidt (78’).

CANADA SOCCER’S WOMEN’S NATIONAL TEAM
Canada are Olympic champions (Tokyo 2020), two-time bronze medal winners (2012 and 2016), and two-time Concacaf champions (1998 and 2010). In all, Canada have participated in seven consecutive editions of the FIFA Women’s World Cup™ (1995 to 2019) and four consecutive editions of the Women’s Olympic Football Tournament (2008 to 2021). At Tokyo 2020, Canada Soccer’s Women’s National Team became the first Canadian team to win three consecutive medals at the Summer Olympic Games and just the third nation in the world to win three medals in women’s soccer.