“At 100 days to go before the Tokyo Olympic Games, I was going through a bad depression patch, and on the edge of stepping away from high performance rowing.

As they crossed the finish line in their final race down the Sea Forest Waterway course, realizing that they had won a bronze medal, Caileigh Filmer reached forward to hug Hillary Janssens.

Caileigh finished third in the women’s pair event in Tokyo with Hillary after a long and very difficult journey to get to the Games.

On her Instagram feed, she shares a very personal account of how she was spiralling downwards with her mental health and how with only 100 days to go before Tokyo, she was in such a bad place she was ready to quit. She was sharing excerpts from the private journal she wrote to try to help her get out of that dark place.

Caileigh won the 2018 World Championships with her partner Hillary Janssens and was getting set for her second Olympics, where she was expected to be a medal favourite. But she writes she was terrified about going. Her worst moments came thinking about sitting on the start line at the Olympics and praying for it to be over. She was frightened she’d be in a worse place and more depressed than ever when the games were over.

In an interview with Rowing Canada Aviron from her room in the Olympic Village conducted just before the competition began, Caileigh was smiling thinking about how she made it to Japan and how she is much healthier these days. She says a few months ago, she never expected to be here.

“I was sad about being sad. I was really upset that I wasn’t excited (to go to the Olympics)”.

She found it shocking that despite the fact she was used to doing 30 hours of training a week, she was hurting so much inside that she felt she didn’t have the strength to get through a seven-minute race in Tokyo.

She adds, “I didn’t want to put myself under the microscope. You’re on television, and everyone is watching you. To me, that was the most terrifying thought to be sitting at the start line and be like, I don’t want to be here.”

In her Instagram post, she writes about how supportive everyone was around her including her coach and teammates who wanted her to put her health first. She was all set to walk away until Karl Hale, a friend of hers from outside the sport who had nothing to gain, told her she shouldn’t quit and gave her a reason to keep going.

She explains the turning point in more detail to Rowing Canada Aviron. “What really saved my Olympic dream is Karl reminded me of the power I had. He said, you’re someone who has been so open with your mental health, why not use your mental health, and how inspiring you are to try to inspire other people by getting through this and you kicking your depression in the butt. 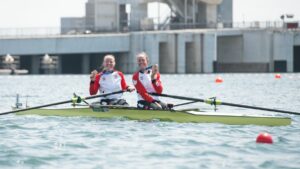