BRONZE 🥉 for Canada at Junior Worlds 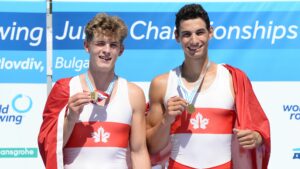 Canada’s men’s pair won bronze in Plovdiv, Bulgaria on the final day of racing at the 2021 World Rowing Junior Championships.

Matteo Banducci (Vancouver College) and Alexander Gonin (Victoria City Rowing Club) crossed the line behind Romania and Germany in the A final with a time of 6:45.22. After opening the regatta with a fourth place finish in the heats, Banducci and Gonin continued to improve upon their results, finishing third in their repechage and second in their A/B semifinal.

This is Canada’s first medal at the World Rowing Junior Championships since 2017, when Grace Vandenbroek and Kieanna Stephens won bronze in the women’s double.

“We are incredibly proud of this entire Canadian team here in Bulgaria,” said Chuck McDiarmid, RCA NextGen Program Lead. “These up and coming athletes have navigated many challenges to get here and represent Canada on the world stage. We look forward to seeing more from these talented NextGen rowers. The future looks bright!”

The women’s quad and women’s double both had fourth place finishes in the B finals (tenth overall), while the men’s quad came in third in the D final (twenty first overall).

In support of the Junior athletes, RCA launched a fundraising campaign to reduce fees associated with international competition and ensure that athletes do not face financial barriers to representing Canada on the world stage. To make a contribution and help Canada’s rowers focus on giving their all on the water, please visit fundrazr.com/2021RCAJUNIOR.