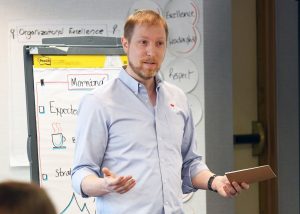 Ottawa, September 9, 2020 – The Canadian Paralympic Committee (CPC) is welcoming a new member to its team, announcing Wednesday the appointment of Brian Edey to the role of Executive Director, Corporate Services. Edey, who will start with the organization on Tuesday October 13, joins from Swimming Canada where he currently works as the Director, Operations.

“We are thrilled to be welcoming Brian to the Canadian Paralympic Committee family,” said Karen O’Neill, CEO, Canadian Paralympic Committee. “Brian is a dynamic, driven, and accomplished leader who already lives our values and who truly believes in the positive impact of sport and its ability to effect change. His knowledge and experience within the Canadian sport system are huge assets and he will bring new ideas, perspective, and passion to the organization. He will be a great enhancement to our team, and we are excited to begin our work with him.”

Edey will become an important member of the CPC’s senior leadership team, helping to set the strategic direction and overall operations of the organization heading into an unprecedented period of four major Games in four years. Areas under his portfolio include financial management, information technology, human resources, operations, and governance. He will also lead Corporate Services operations for Canada at the Paralympic and Parapan Am Games.

“I believe in the power of sport to develop great people, and that Canadian athletes can be the best in the world,” said Edey. “I feel privileged to have had an opportunity to contribute to Canadian sport and supporting Canadian athletes throughout my career. I’m very excited about the opportunity to continue this work at the Canadian Paralympic Committee. The CPC is a world-leading national Paralympic committee and I can’t wait to play a leadership role in the continual pursuit of excellence for the organization.”

“I’m very thankful to all of the wonderful people within Swimming Canada who have supported me over the past six years,” added Edey. “I will miss the team tremendously, but I look forward to supporting and cheering for them – and all our Canadian sports – in my new role.”

Edey, who holds a Master of Sport Administration from the International Academy of Sports Science and Technology in Lausanne, Switzerland, has nearly 15 years of experience working in sport in Canada in different roles, including seven years at the Canadian Olympic Committee and the last six-and-a-half years at Swimming Canada. He also is a former national team swimmer, winning three bronze medals at the 2003 Pan American Games in Santo Domingo, Dominican Republic.

In his time at Swimming Canada, the organization saw continued progress, including a 40 per cent growth in staffing structure in the past four years. In his role as Director, Operations, he oversaw staff management, safe sport, information technology, and general operations. Most recently, he led Swimming Canada’s strategic planning process, and a working group developing its COVID-19 return to swimming protocols.

“This is a fabulous opportunity for Brian and also a fabulous opportunity for the Canadian Paralympic Committee,” said Ahmed El-Awadi, CEO, Swimming Canada. “Brian has a longstanding history and reputation and has built tremendous experience in the Canadian sport system. While we will miss him greatly, we know that Brian’s work in his new role will make the entire sport system stronger for everyone.”