Baie-Saint-Paul, QC (September 24, 2021) – After a two-year hiatus, the 2021 Canadian Mountain Bike XCO Championships kicked off on Friday with the cross-country races for Cadet (Under-17), Junior (Under-19), Under-23 and Elite men and women. For the first time in several years, all eight titles were awarded to new champions in their respective categories. 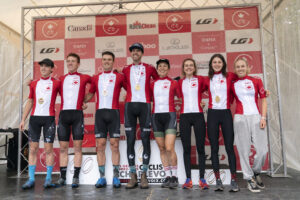 All eight Canadian champions in the U17, Junior, U23 & Elite categories
Photo credit: Ludovic Boquel

Over 150 athletes competed on a tough and technical course, with riders completing between 2-5 laps. U17 and Junior riders rode on a relatively smooth course until heavy rain began to fall during the U23 and Elite women’s race, impacting the course and the race pace.

Jennifer Jackson (Norco Factory Team) and Laurie Arseneault (Canyon MTB Racing) positioned themselves at the front of the race from the onset and rode together until the second lap, where Jackson decided to attack. Over the next two laps, the cyclo-cross star managed to create a significant gap between herself and Arseneault, with the former U23 champion chasing her down in the fourth and final lap. Jackson eventually crossed the finish line first to take her first Elite title, followed by Arseneault and Sandra Walter (Liv Racing Collective). The U23 field finished shortly after, led by 2019 Junior champion Emilly Johnston, with Marianne Théberge (Team Pivot Cycles – OTE) finishing second and Sidney McGill (Pedalhead Race Room) in third.

“I let (Laurie) lead for a little section but I felt like I had a little bit of an edge, so I moved back in front and stayed on my pace pretty hard,” said Jackson. “I’ve just been thinking about this since I won the under-23 title my first season mountain biking. Racing at a national level is different and my motivation here is different; it means a lot more to me to race for the win here. I really hope that next year I can carry this with some momentum and confidence to the world cups.” 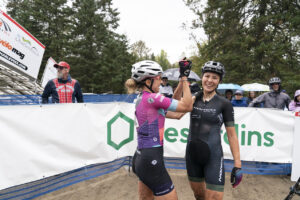 By the time the men’s race started, the skies had opened up and riders had to deal with muddy, slippery and wet conditions. Despite this, Léandre Bouchard (Team Pivot Cycles – OTE) was determined to win his first Elite title and attacked from the start, securing a place in the lead with teammate Marc-André Fortier. They took turns at the front, but Bouchard ultimately passed Fortier to claim the title with a comfortable lead. Tyler Orschel came in third. Bouchard’s Pivot Cycles – OTE teammate Gunnar Holmgren also finished on the top step of the podium in the U23 category, followed by Victor Verreault (Vélo2Max) and Charles-Antoine St.Onge (Dalbix Siboire).

“I was chasing the Elite title for a while and the great thing was I was able to do it in front of my home crowd,” said an emotional Bouchard. “I’ve had a good season; I was the top Canadian at all the world cups except Leogang so I knew I was the favourite and I’m happy I delivered. My strategy was just to make it hard. Every opportunity you have to go at the front, you just have to take it to increase the pace, so I’m glad my plan worked out today.” 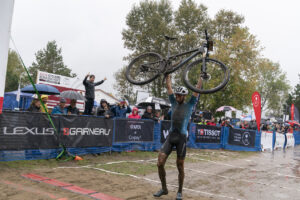 In other results, 2019 U17 champion Owen Clark (Homestead Racing) won the Junior men’s race with a significant gap, while Ophélie Grandmont (CC Mont-Sainte-Anne) won the women’s title. In the U17 category, Ian Ackert (Team Ontario) & Marin Lowe (Cycling BC) were the top finishers.

The event also highlighted four-time Olympian Catharine Pendrel, who will be retiring at the end of the season. Pendrel is one of Canada’s most decorated mountain bikers of all time, having won an Olympic bronze medal, two world titles and three world cup overall titles over the course of her career.

On Saturday, athletes will compete for the first-ever Short Track Canadian titles in the Elite men’s and women’s categories starting at 2:15pm EST. Full results and schedules can be found here.