Ottawa, ON, Aug. 4, 2021 – Averill Saunders of Sundre, AB, paved the way for a Canadian contingent of Individual competitors at the FEI Vaulting World Championships for Juniors, held July 28-Aug. 1, 2021, in Le Mans, FRA.

The Individual division featured two rounds, each of which was comprised of a compulsory test and a free test. The top 15 athletes after round one moved forward to round two, after which both round’s totals were averaged to determine final scores and placings.

At the 2019 edition of the Championships, Saunders earned a record top-20 finish for the maple leaf in the Individual Female division. In 2021, she became the first female Canadian to advance to round two and ended up breaking into the top 10 overall, placing ninth on a final score of 7.554.

The highest mark for the 17-year-old came in her round two free test, where she achieved an impressive 9.207 technique score with Christmas PS Z (Cosun x Karandasj) and lunger Nienke de Wolff, who co-owns the eight-year-old Zangersheide gelding with DeWolff Vaultinghorses. 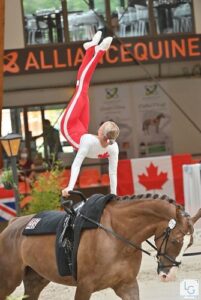 Averill Saunders of Sundre, AB, performed with Christmas PS Z and Nienke de Wolff to become the first Canadian to ever make it to round two of the FEI Vaulting World Championships for Juniors, held in Le Mans, FRA, from July 28-Aug. 1, 2021.
Photo Credit: Les Garennes

“Being back in Le Mans had a surreal feeling for me,” said Saunders, whose Junior Championships debut was in the same city back in 2016. “Already having competed there made me significantly more confident and connected to the crowd. Overwhelmed with pride and excitement [after making it to round two], I did some of my best vaulting ever.”

Saunders continued, “Vaulting in Canada is evolving immensely: every championship, we are doing better and better. As I age out of the Junior field, I am very excited to start representing Canada as a Senior and watch other Juniors obtain their goals. I want to thank Equestrian Canada for their ongoing support through our travels and ensuring we were able to compete at the championships.”

In the Individual Male division, Daniel Klotz-Dedora, 14, of Cochrane, AB, produced a second
top-10 finish for the red and white. Performing with Dr. Doolittle 5 (Dr. Jackson D x Advocat), a 14-year-old Württemberger gelding owned and lunged by Klaus Haidacher, he secured 10th on a final score of 7.037. 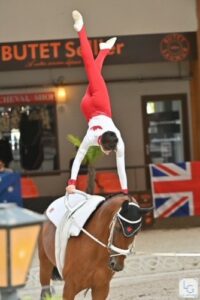 “The Championships were an incredible experience,” said Klotz-Dedora. “I could not have asked for a better team, coach and horse to take on this journey. I am proud that I represented Canada at this event and excited to continue working hard in this sport and looking forward to future world championships.”

Junior Individual Male gold went to Sam Dos Santos of the Netherlands. Performing with Chameur and lunger, Rian Pierik, he earned a final score of 8.360. Germany rounded out the podium once again with Philip Goroncy on Hendrikx, lunged by Antje Dohnert, in the silver medal position (8.263) and Simon Stolz, Happy Dancer and lunger, Alexandra Dietrich taking bronze (7.731).

Also appearing for Canada in round one of the Individual Female division was Jacynda Row, 14, of Edmonton, AB. She scored 6.520 for 46th place with Klaus Haidacher’s Pli Oreille (Conthargos x Caspar), an 11-year-old Oldenburg gelding lunged by Nicole Voithofer. Megan Leeper, 17, of Strathmore, AB, followed two spots behind with a score of 6.300, once again with Pli Oreille and lunger, Voithofer.

“At each Junior Championships, the level and quality of vaulting has been raised and our athletes are now part of the mix, which shows the growth and development of the sport in Canada,” said Chef d’Équipe, Jeanine van der Sluijs. “The number of clubs and athletes in Canada is still relatively small but the quality of our programs has been improving tremendously and this is starting to be apparent in the results of our international efforts. It’s an exciting time to be part of vaulting in our country as we continue to grow and develop the sport.”

Shaina Hammond of Delta, BC, was scheduled to compete in the FEI Vaulting World Championship for Seniors on Aug. 23-29, 2021, in Budapest, HUN. She has withdrawn due to injury.

For more information and full results from the 2021 FEI Vaulting World Championships for Juniors, click here. Recordings of the performances can be viewed on the FEI Vaulting Facebook page.