Adversity, Experience and a Fighting Spirit

Arencibia, of Montréal, fought in the under-90 kg category on Friday. After winning his opening bout against Latvia’s Maksims Duinovs, he lost a challenging battle to Adam Sangariev of Russia in a fight that lasted almost 11 minutes. The bout remained tied throughout regulation time and well into overtime, when Sangariev finally managed to overcome the Québécois. 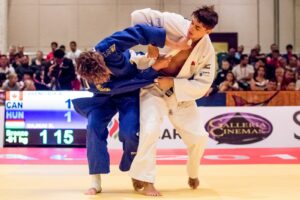 “Alexandre’s first match went really well. He was very physical, and he deserved the win. However, Sangariev is very powerful and he fought strategically. Once again, we’re seeing the effects of the Canadians’ time away from the tatamis. It was a good, long fight. Alexandre tried hard, but Sangariev is a strong strategist,” noted Canadian coach Jean-Pierre Cantin.

Also on Friday, Ontario’s Alexandria Lefort lost her first bout in the under-70 kg category to Italy’s Martina Esposito, who won by ippon.

“Alexandria came close to scoring near the end of the bout, but she fell on her head. She ended up with a concussion, but she came back and put up a strong fight in the second half. I was happy with her performance. She should be proud of herself,” stated Cantin.

On Saturday, Ian Ryder was the first Canadian to step onto the tatamis in Olbia. The British Columbian won his first fight of the day in the under-100 kg category against Jean Carletti, in front of the Italian’s compatriots.

However, he lost his next match to Uzbekistan’s Utkirbek Turoboyev, who scored an ippon for the win. Turoboyev later went on to snag a bronze medal.

“Turoboyev is very strong, but Ian could have beaten him. However, Ian may have become a little over-confident at one point. His opponent took advantage of that. It was a good, close fight,” explained Cantin.

Coralie Godbout of Stoneham, QC, was the last Canadian in action in Italy. Her day started off well, with a solid defeat over Azerbaijan’s Narmin Amirli in the under-78 kg group.

In the next round, however, she had her work cut out for her. She was defeated by waza-ari by Germany’s Anna Monta Olek, who went on to claim the gold medal.

“Olek is ranked first in the world, so we knew she would be a formidable opponent. Coralie did well, despite a few minor injuries. She lost, but it was to the number one judoka. We’re proud of her,” noted Cantin.

Overall, Cantin is satisfied with the performance of his troops at the World Championships, considering the circumstances. He makes no secret of the fact that the judokas still have a lot of work to do to get back into top condition, especially after several months away from the mats.

“It’s clear that the pandemic affected our ability to prepare, as opposed to many of the European countries. We have some catching up to do. This week, it was often a fine line between winning and losing for some of our athletes. Our young judokas train very hard, and they’re motivated. It won’t take us long to get to the next level,” concluded Cantin.