Skip to main content
Home What do the different jerseys at the Tour de France mean?

What do the different jerseys at the Tour de France mean? 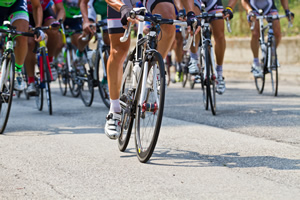 The Tour de France is the most prestigious event in all of cycling. The 2014 edition will lead riders through 21 stages, covering 3,664 kilometers. For each competitor, the goal is to be the rider wearing the yellow jersey, le maillot jaune, after crossing the line on the Champs-Élysées in Paris on the final day.

Though the most coveted jersey is the maillot jaune claimed by the overall winner, there are other jerseys to be won during the event; in other words, there are races within the race.

Yellow jersey (maillot jaune)
This jersey is given to the rider who completes the race with the fastest overall time. The winner has to have the ability to time trial, climb and be able to handle the pace set by the peloton on each stage. This is the most sought out jersey and the one every rider dreams of wearing at the end of the overall race. The 2013 winner was Chris Froome of Team Sky.

Green jersey (maillot vert)
The rider who wins the race points competition, usually a sprinter, wins the green jersey. Points are given to the first 15 riders to cross the line on a sliding scale on stages and intermediate sprints. On flat stages the winner collects 45 points, 30 points on medium mountain stages, and 20 points on high mountain and individual time trial stages. Points are also given during intermediate sprints, with 20 points awarded to the winner down to 1 point for the 15th-placed rider. The rider who consistently finishes highest each day accumulates the most green jersey points. Peter Sagan from the Cannondale team won the green jersey in 2013.

The rider who accumulates the most points from the different climb categories wins this jersey. These riders are known as the “King of the Mountain” (KOM), as the winner is usually a pure climber. Climbs are divided into 4 categories, with a category 1 climb being the most difficult and 4 being mild. A Hors climb is a fifth category that is classified to be even more difficult than a category 1 climb; an example would be Alpe D’Huez. The 2013 winner was Nairo Quintana of the Movistar Team.

White Jersey
The white jersey is awarded to the best young rider with lowest overall time. This year it will be awarded to the rider who was under the age of 25 before January 1, 2014. This jersey was also awarded to Nairo Quintana in 2013.

Every team is there to win the maillot jaune but only one rider will get the privilege to wear that jersey at the conclusion of stage 21. The Tour de France takes place from July 5 to 27 with the first stage starting in the United Kingdom, between the cities of Leeds and Harrogate. The different jerseys add intrigue and excitement to the race as they bring another dimension to the competition.