Skip to main content
Home The Importance of Risky Play for Physical, Social, and Emotional Development

The Importance of Risky Play for Physical, Social, and Emotional Development 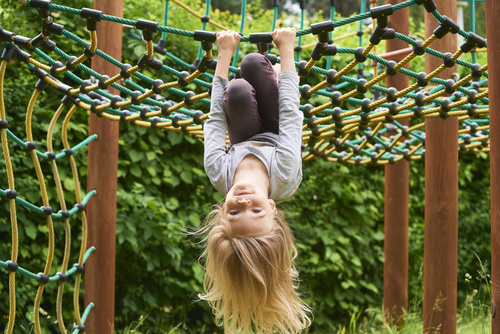 Engaging in risky play is a natural part of a child’s development. In addition to increasing physical activity and developing social skills, risky play is a way by which children learn to adapt to their environments and fears, and may moderate the potential of a future anxiety disorder.

Risky play is a form of play that is thrilling and involves an element of potential physical injury. It most often occurs outdoors, during free play, where children challenge themselves by overcoming fear and trying something new, or by tiptoeing the line between being in or out of control. Risky play is not being reckless or careless.

Types and Functions of Risky Play

The Emotion Regulation Theory of Play

Risky play has been observed in other animals, and the way it transcends time and culture suggests that despite the risk of injury, it is an evolutionarily essential part of maturation and development: the advantages must outweigh the risks.

For humans, and other mammals, play serves to teach us how to regulate our emotions, particularly fear and anger. Through risky play, children learn how to manage and overcome their fear. They expose themselves to an individual-appropriate level of fear and practice remaining reasonably calm while they choose the best way to tackle that fear. It is possible that if children do not have the opportunities to go through these natural processes of overcoming their fears, the fear can become a phobia later in life. In rough and tumble play, children gain social skills, and learn to regulate anger and aggression: for the fun and play to continue, they must overcome negative emotions that could lead to actions that would hurt or upset their playmate.

The Paradoxical Nature of Overprotection

Parents want the best for their children, and for some, that might include keeping them as safe as possible by minimizing risks. In some ways, this natural parental desire to protect their kids from harm has reduced valuable opportunities for children to develop their independence and creativity. Not only are children not satisfying their innate needs for discovery and risk-taking, these efforts are not necessarily keeping kids safer. In the US, the frequency of playground-related emergency room visits in 2012 was similar to the frequency in 1980, when children were afforded much more freedom and engaged more often in risky play. Attempts to protect children by restricting their freedom may actually be hurting them more:

One successful example of risky play is a playground in North Wales called The Land – there is even a documentary about it. It resembles an old junkyard and there, children are free to let their imaginations loose, creating fires, building with tools, and playing without inhibition.

The culture of The Land is on the extreme other end of the spectrum for many parents and caregivers. For those that recognize the importance of risky play for your children, OutsidePlay is an online tool to help you feel more comfortable in allowing them to spend more time playing outside. With benefits for health, self-esteem, risk management, and their ability to keep themselves safe, letting your child engage in risky play and allowing them more freedom is a powerful thing you can do for their current and future development and well-being.