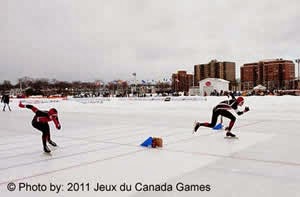 Polarized training is an approach which emphasizes that the hard days should be very hard and easy days be very easy. These days are polar opposites – hence polarized training. The benefit of this approach is to be able to train hard on the hard days, recover on the easy days and then be able to train hard again, since you have recovered on your easy day.

A study done on high performance elite endurance athletes suggested that when using the polarized training approach, 75 percent of the training should be low intensity, zone 1 and 15 to 20 percent at very high intensity, zone 3. The other 5 to 10 percent should concentrate on threshold or tempo training, zone 2.

Though most of your training time should ideally be in zone 1, threshold training can still be carried out, which is zone 2. In a study done on recreational runners, polarized training was shown to improve a 10km performance by 5 percent as compared to 3.6 percent in runners who used the threshold training approach, where the majority of training time is spent in zone 2.

It is important to make sure that your easy days are easy and hard days are hard. Training in the moderate zone on the easy days will prevent you from going as hard as you otherwise could on the hard days. Before embarking on polarized training, talk to your coach or other athletes who use the approach to best understand if it is the right training approach for you.