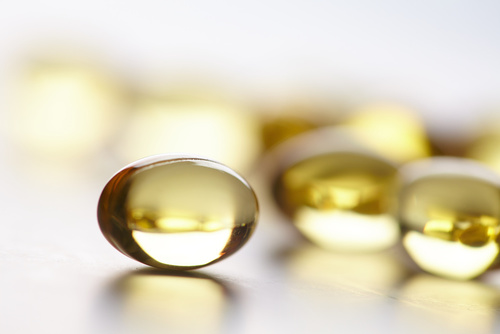 Omega-3 fatty acids are associated with various health benefits, affecting heart and brain health, learning, and cholesterol levels. Its anti-inflammatory properties have led researchers to explore how omega-3 supplementation could mediate the effects of exercise-induced muscle damage. What implications does omega-3 fatty acid supplementation have for athletes and their performance?

Exercise-induced muscle damage (EIMD) often occurs after engaging in eccentric exercise or in exercise we are not used to. What we may notice the most is how sore our muscles feel 24-72 hours after the workout. There are usually also localized inflammation and decrements in the strength and function of those muscles. For athletes preparing for or participating in competition, recovery is of utmost importance in order to get back to peak performance.

Fish oil and krill oil are a popular sources of omega-3 fatty acids, specifically eicosapentaenoic acid (EPA) and docosahexaenoic acid (DHA). Already popular as an anti-inflammatory, researchers are examining the use of omega-3s in an athletic context; EPA in particular is connected to an improved inflammatory response to EIMD.

Many studies show that consuming omega-3 fatty acids with a high EPA to DHA ratio has positive consequences for subjects participating in high-intensity and/or eccentric exercise. The exact impact, however, differs depending on the timeframe of supplementation:

Participants consumed either an EPA and DHA supplementation or a placebo for eight weeks, then completed eccentric elbow flexion exercises.

Chronic consumption leads to the incorporation of omega-3 fatty acids into the muscle cell membrane, changing its permeability and offering a degree of protection from EIMD.

Participants ate an omega-3-restricted diet for 14 days before performing eccentric bicep curls. They then consumed omega-3s for seven days and performed the same exercise.

Participants ingested either a low-EPA fish oil, a high-EPA fish oil, or a placebo supplement immediately after completing squat jumps and strength tests.

Implications for Athletes and Others

It is important to keep in mind that these are study results and stem from a very specific and controlled set of parameters. The effect of omega-3 supplementation was different depending on the supplementation period, but may also vary depending on the dose, the type of exercise, the muscle group exercised, the time elapsed when measurements are taken, and of course, on individual differences. In all conditions, though, omega-3 supplementation had positive influences that could benefit performance. Consulting with a dietician may help you understand how to increase your dietary omega-3 and if supplementation fits into your particular lifestyle or training plan.