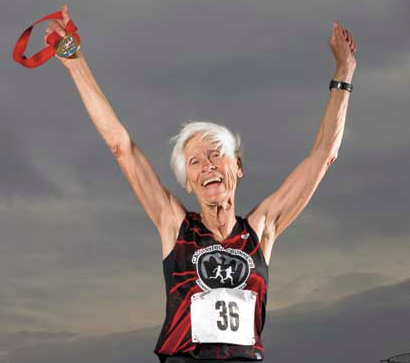 When I look at my mother now, walking with incredible speed around a care home, I remember her pace, and know that she still instinctively moves because she can.

She has Alzheimer’s now, and does not go as far or as often as she once did.  Her big toothy grin and sense of wonder and curiosity has not left her as so many other things have.  To tell the whole tale would take far too long, and so we are left with the essence of mom.

She started running in earnest after her three children left home to pursue studies, and with the newfound time, she learned to push new boundaries with runners on her feet.  Her career in early childhood education took a lot of energy, but her running friends were the motivation needed to show up for training and racing for years to come.

Her energy waned and colon cancer became part of our families’ language, and a new challenge arose–and yet through her running she mentored others with the same challenges.  And hauled home some hardware at the Canadian and North American champs during Chemo and radiation therapy.

Her next 20 years of competition were marked by the love of movement, not about the many medals gained around the world. With laughter (always!) she would open new doors and show that master athletes CAN!

My mom is my inspiration, in more ways every year.

Soon she will not know me, but she darn well knows how to run!