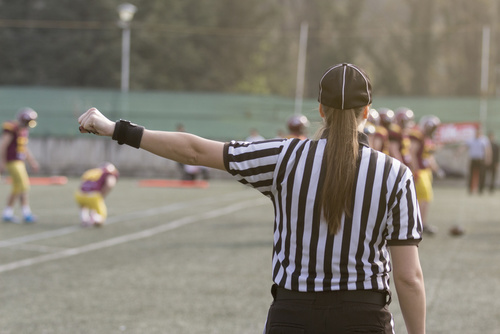 Sport officials play a vital role within sport and should be viewed along the same lines as coaches within the sport system in regards to participation and development. Officials should not be viewed as just service providers, but rather as integral participants within sport. Without an official to referee a game there is no game. However, in recent years there has been an increasing shortage of officials. There is a significant problem in the retention of officials, particularly inexperienced officials at the grass roots level of sport that can be developed. How can we best understand and support the retention and personal growth of sport officials?

Why do individuals get into officiating?

For many people, the reason why they pursue officiating is as simple as the love they have for sport. Often they are current or former athletes and have a desire to continue to challenge themselves in the sport from a different perspective and stay connected to their sport. Many officials choose this avenue as a way to give back to sport, to help mold future participants or to help build the sport. For some of the younger newer officials it is a way to earn some money or to be recognized by people who are important to them. For those few who became an official in a sport they did not participate in as an athlete, many times they pursued officiating because their children were participants.

So why do officials leave the role?

There are a variety of reasons that officials give as to why they leave their role and some of them include:

What do officials say they need to stay in the game?

Staying involved with anything requires that an individual feels a sense of welcome and belonging to a community. Providing officials with tools, resources and recognition could go a long way in meeting this need. Officials have been asked what they would like to see to make them feel better about their role and some of the responses include:

While there are a few factors that cannot be controlled that cause stress points for officials, in the big picture there are many opportunities within the sport community that can be modified or improved to provide a better environment for attracting and retaining officials in sport.

Cuskelly G and Hoye R. (2004). Problems and Issues in the Recruitment and Retention of Sports Officials. A report prepared for the Australian Sports Commission.