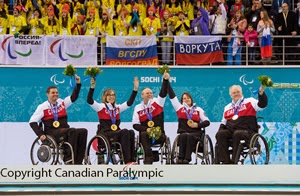 As the flame went out at the Sochi 2014 Paralympic Winter Games, Canada stood third on the medal table. We accumulated 16 medals in total (7 Gold, 2 Silver and 7 Bronze). These games, exemplified by the slogan #WHATSTHERE, truly showed that the impossible can be possible.

There were great moments that made these games memorable. Brian McKeever falling in the 1km visually impaired cross-country race and recovering to win gold is a memory that stands out. McKeever left these games with a total of 3 gold medals, making his Paralympic career total 10. The wheelchair curling team came through once again as they cemented Canada as the best curling nation, maintaining Canada’s place as the only country to ever grace the top of the Paralympic podium in the event. We also witnessed 16 years old Mac Marcoux, the youngest member on the Paralympic team, bring home a gold and 2 bronze medals in alpine skiing. Showing the future is bright.

The 2014 Sochi Games were the largest Winter Paralympic Games in history with 700 athletes and 45 countries taking part. For 9 days the games showcased some of the best athletes in:

In 2018, the XXIII Olympic and XII Paralympic Winter Games will be hosted in Pyeongchang, South Korea from February 9th to 25th and March 9th to the 18th respectively. In two years Rio de Janeiro will be host city for the 2016 Olympic and Paralympic Summer Games.