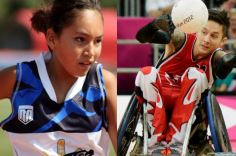 Sunday, June 21, 2015 is National Aboriginal Day in Canada where people come together to celebrate the successes, contributions and cultural heritage of the of First Nations, Inuit and Métis people. Traditionally Aboriginal games were used to teach specific survival skills that they would use on a regular basis, for example, wrestling, archery, spear throwing, and foot and canoe racing. Over the years these games have evolved into multi-sport events that bring together Aboriginal people from across North America to compete but also to celebrate and showcase their culture.

North American Indigenous Games – This multi-sport event celebrates unity, sport, youth, culture, volunteerism and team work. The most recent Games took place in Regina in 2014 where it hosted 3,7000 athletes from over 21 regions in North America and included 14 different sports. The Games stands out for its dedication in representing the various languages and cultures through art, song and dance.

Arctic Winter Games –  One of the goals for the Arctic Winter Games is to create awareness of the similarities and differences between the people represented, and each participating country is encouraged to contribute performances in dance, art, music, plays or song. The Games are a multi-sport event that features a mix of 16 indoor and outdoor sports for example, alpine skiing, badminton, cross country skiing, wrestling, hockey and indoor soccer; the next Games will be held in Nuuk, Greenland in 2016.

Did you know that we have Aboriginal cultures to thank for toboggans, snowshoes, lacrosse (Baggataway) and canoes? – The Canadian Encyclopedia

Waneek Horn-Miller is a Mohawk of Kahnawake. She was a member of the Canadian Women’s Waterpolo Team that won a Gold Medal at the 1999 Pan-Am Games in Winnipeg. She created a documentary series in 2011 that starred six Mohawk people titled ‘Working it out Together’ that addressed various areas of Aboriginal health, such as obesity, self-esteem, and exercise routines.

Janice Forsyth, former Aboriginal track athlete, member of the Fisher River Cree First Nation of Manitoba, the director of the International Centre for Olympic Studies and an assistant professor in the School of Kinesiology at the University of Western Ontario. She recently published co-authored the book Aboriginal Peoples and Sport in Canada that details the Aboriginal and Canadian sport systems and aims to better address the needs of Aboriginal athletes.

Where can I get more information?

The Aboriginal Sport Circle (ASC) is recognized as the national voice for Aboriginal sport in Canada and is an organization that works toward coordinating events and creating programs that support athlete development as well as promoting active, healthy lifestyles and communities. ASC recently partnered with Canadian Sport for Life (CS4L) to develop the Aboriginal Long-term Participant Development model with the goal of encouraging physical literacy within Aboriginal communities. For more detailed information on this process, be sure to read the article provided in our Athlete Pathways magazine, a digital resource available for free online.

Aboriginal sport is a unique combination of competition, celebration, culture and community. If you would like to join in the fun on June 21, you can check out the various events listed on the Government of Canada National Aboriginal Day website.