Recap of the 2017 Canadian Rugby Championship

Rugby Ontario – (CALGARY, AB) – This past week, the Ontario Blues high performance program sent four age-grade teams to Calgary, Alberta for their respective Canadian Rugby Championship (CRC). At the same time, the Blues Senior Men’s team was in Calgary to complete their CRC season. Below is a recap of each team. 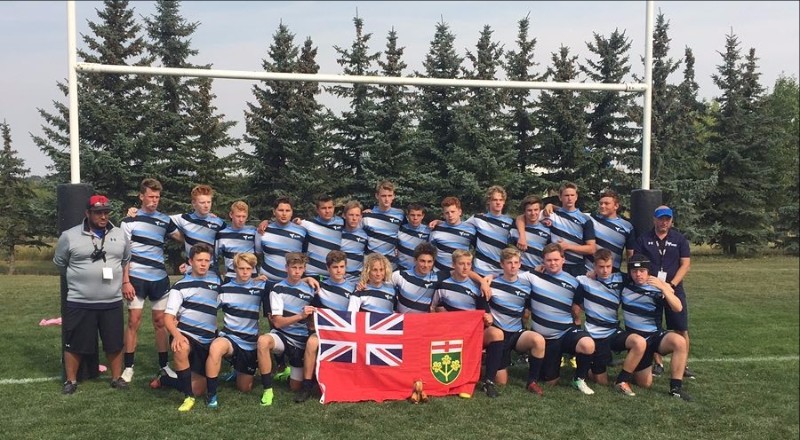 Ontario Blues Men’s team competed in the Under-16 division, as a development opportunity. They played against a strong Under-16 division. Their pool included two British Columbia U16 teams and the hosts from Alberta. The Blues finished in sixth place in the tournament. Congratulations to the U15 staff and players on a great tournament! 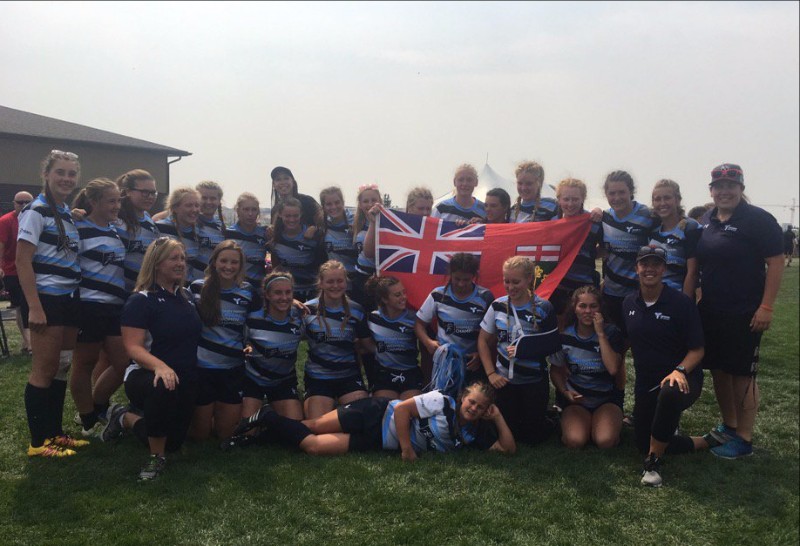 The Under 16 Ontario Blues Women’s team competed in the Under -16 division and had a strong tournament. The Blues only lost one game in round robin against a tough British Columbia side. They met the host Alberta Wolf Pack in a thrilling semi finals. After 60 minutes, the two teams were tied at 17, resulting in Overtime being played. The Blues came out on top in the OT period, winning that match 22-5. They then met the British Columbia side which they had lost to in the round robin. After the first half, the Blues were down 10-5 versus the Bears, but they were resilient in their second half attack, putting up 22 points in the final stanza. Congratulations to the Under 16 players and staff on winning Gold at the 2017 Under 16 Canadian Rugby Championship! 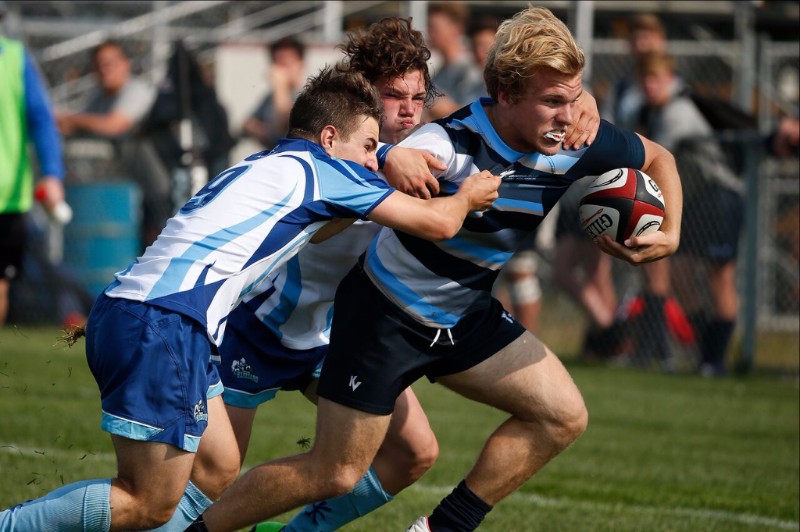 The Under-17 Ontario Blues Men’s team participated up an age group in the Under-18 Canadian Rugby Championship. From the beginning, they were in tough against a strong Under-18 field, but were resilient. Their first game resulted in a hard fought loss against the host Alberta Wolf Pack, but they came out in Game 2 with a definitive win against the Prairie Blizzard. Though finishing ahead of Alberta in points, the tie breaker was a head-to-head, which resulted in the Blues narrowly missing out on the semi-finals. They finished in fifth place. Congratulations to the U17 staff and players on a great tournament! 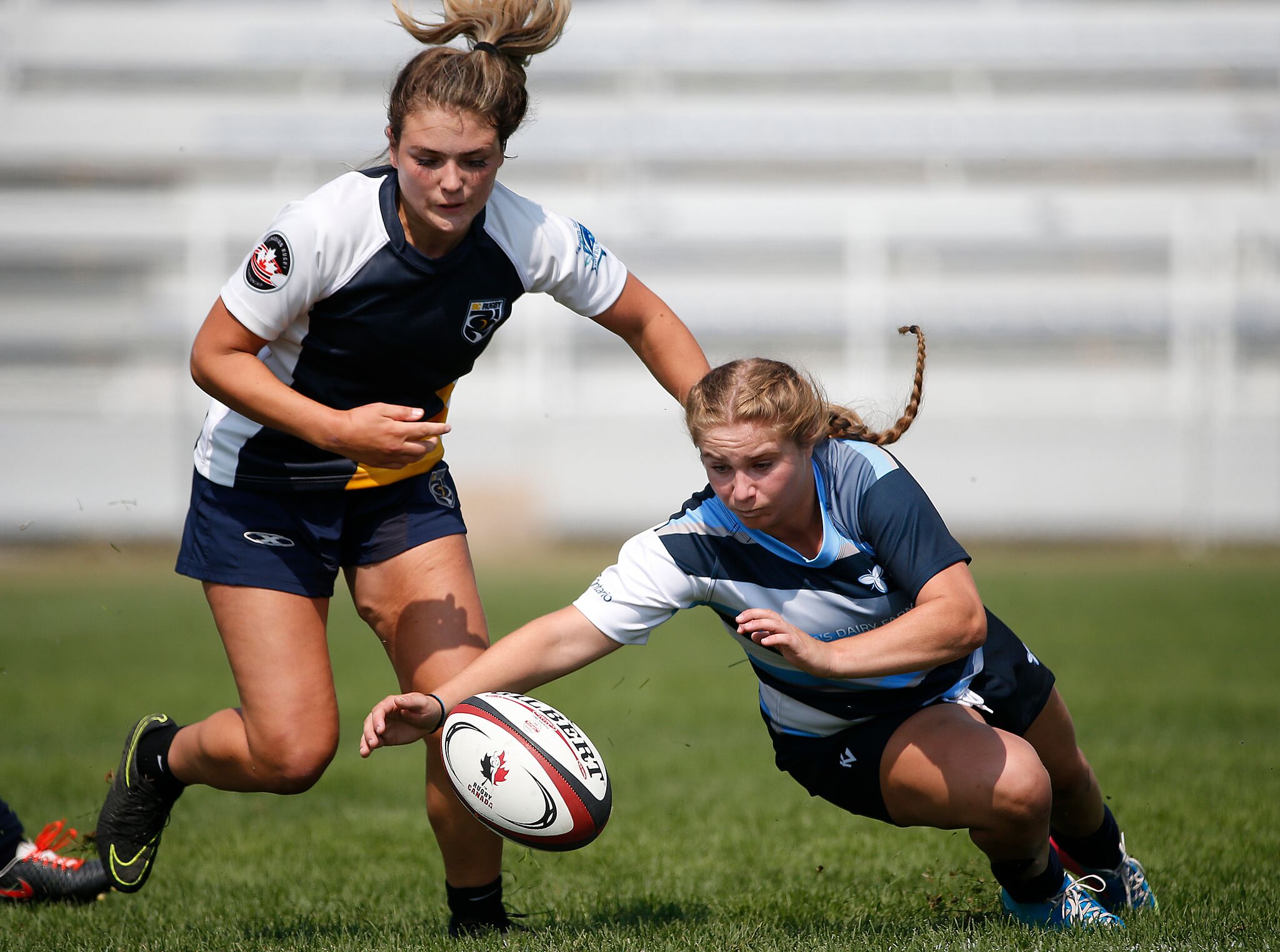 The Under-18 Women’s ‘A’ team traveled to Calgary to participate in the Under-18 Canadian Rugby Championship. They met British Columbia in Game 1 and were narrowly defeated. Following that game, the Blues beat Quebec to earn a spot in the semi-finals. In the semi-finals, the Blues met up with a strong Alberta side, who came out on top. In the bronze medal game, the Blues lost once more to British Columbia. Congratulations to the U18 Blues Women on a strong fourth place finish!

The Ontario Blues Senior Men’s team were strong favourites to win the MacTier Cup this year, returning as defending champions, but the other three CRC teams (BC Bears, Atlantic Rock and Prairie Wolf Pack) knew that the Blues were the team to beat. The Blues won their first two matches against Atlantic Rock and the Wolf Pack. In Game 3, the Blues met the BC Bears in what was a warm up to their eventual MacTier Cup match on Saturday. The Blues put out a young side for this game and the Bears took advantage early, going up 31-0 at the half. The Blues came back to within three points and Andrew Coe looked to have scored a game-winning try in the last seconds, but the referee called it back because of a forward pass. The final was a dogfight from start to finish for both the Blues and Bears. Andrew Ferguson led the Blues with two tries and two conversions and was heavily involved in many of the other Ontario scoring plays. Ontario was narrowly defeated 30-29 in the final match and finished second in the 2017 Canadian Rugby Championship.

Rugby Ontario is the provincial sports governing body responsible for the organization of rugby in Ontario. Our mission is to establish a stronger identity for rugby in Ontario by promoting the sport’s core values and by fostering a culture of inclusiveness and excellence on and off the field of play.