Golf Ontario – RICHMOND HILL— The final round of the Baka Wireless Ontario Public Player Championship wrapped up on Aug. 30 from Diamondback Golf Club in Richmond Hill. The day began with Erin’s Cameron Brennan and Port Perry’s Jake McNulty tied for the lead at one-under. When all of the scores were in, it was McNulty who captured his fourth different provincial title.

McNulty, who previously won the Ontario Junior Boys’, Junior Spring Classic and Men’s Match Play Championships wasted little time in taking sole possession of the lead with a birdie on the opening hole. After that he would never look back. He made the turn one-under and had only one blemish on his scorecard, a bogey on the 10th, which he made up for with a birdie on the 11th. McNulty added the exclamation mark with a birdie on 18 as he finished the day two-under (70) to take the title at three-under (71-70-141).

Winning one provincial championship is an impressive feat but to capture four different titles is quite the accomplishment. McNulty spoke about what it meant to him. “It is pretty cool! I played pretty well in this tournament. I hit 30 greens in two days, so I didn’t have too many opportunities to mess up.”

McNulty did face some adversity on his way to the title, a triple bogey followed by a bogey on the eighth and ninth holes during round one. However, he recomposed himself and put it behind him. “I am used to having bad holes like that. When I won the Ontario Junior I had a nine and still finished under par. You just have to be able to clear your mind and keep going. You can’t let one shot affect the next four or five.”

Picking up the silver was Thornhill’s Jaron Brown. Brown began at three-over but had the low round of the day carding a three-under (69). He finished the tournament at even par (75-69-144).

Bronze went to Brampton’s Jean-Henri Lavoie. Lavoie was even (72) during the second round after an opening round of two-over (74). He finished the tournament at two-over (74-72-146).

Winning the Net B Flight was Keswick’s Alan Sandercock. Sandercock found himself two-over after an opening net round of 74. He had an impressive second round finishing with net score of six-under (66). That allowed him to claim the title by two shots at four-under (74-66-140).

In the Net C Flight, Combermere’s Joseph Hamontook the title. Hamon entered the day at net three-over after a 75 in the opening round. He had a stellar second round finishing with a net score of three-under (69). That brought him to even par (144) for the championship, good enough for a four-shot win. 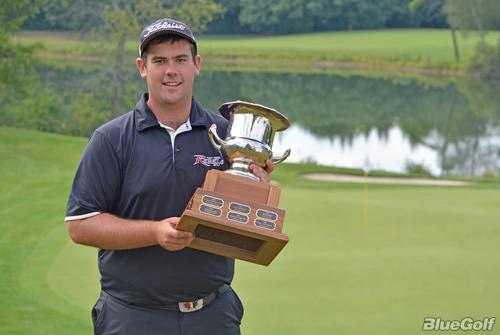 For full tournament information, including the final leaderboards, pairings and live streaming video archive, see the tournament sites at: https://gao.bluegolf.com/bluegolf/gao17/event/gao1730/index.htm

Golf Ontario would like to thank Diamondback Golf Club, their staff and volunteers for hosting the Championship. Thanks also to the Golf Ontario volunteers and title sponsor Baka Wireless for their support of golf in Ontario.

The Baka Wireless Public Player Championship has been contested since 1958. It was suspended between 1984 and 1995. This event is a two-round competition with a gross championship and two net flights. Former champions include: Ontario Golf Hall of Famer Gerry Kesselring, Ken Trowbridge, Dave Bunker and Lucas Kim. Craig Loughry holds the record for the most victories with four.