Manitoba’s Van Lankvelt made his mark on volleyball in Canada

Volleyball Canada – Another veteran of the Men’s National Team program is moving to another phase of his life.  After 10 years with the men’s team, Toontje van Lankvelt has decided not to return this year, making 2016 World League his final tournament with the team.

Van Lankvelt developed his love for sport in his home province of Manitoba. “Coming from a small farm town of 1000 people (Rivers, MB), I would have never guessed growing up that I would be able to see the world through volleyball while competing at the highest level,” explains van Lankvelt, who played for the University of Manitoba Bisons from 2002 to 2007.  “I’m forever grateful to all of the teammates, coaches, and staff that have helped me achieve my goals along the way. … It took a lot of hard work and sacrifice and I’m thankful that these skills will allow me to be successful in my future endeavours.” 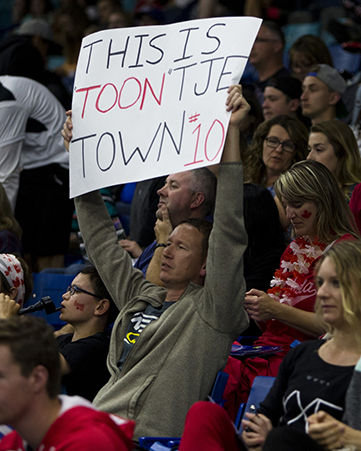 He counts a Team Canada victory against Serbia in the 2010 World Championships as a highlight.  “It was huge for Canadian volleyball at the time and a very important step in my own career,” he says now.  Van Lankvelt also played a key role in many World League campaigns, was a member of the bronze-medal winning Toronto 2015 Pan Am Games team, and helped the team qualify for the 2016 Olympics at the World Qualification Tournament last year in Japan.

“I’ll always remember the bond shared with all of my teammates over the past 10 years with the program. I’ve met many of my closest friends through the national team program and I’ll miss the day to day interaction with all of them,” said 32-year-old Van Lankvelt.

The outside hitter’s pro career included stints in Greece, Belgium, Italy, France, Poland, and most recently in Korea.

But travel is not in his immediate sights. He is a proud new father, and plans to spend more time with his baby, Kye, who was born on March 04, and his wife Kristina.

“My entire family – especially my parents Annie and Jan van Lankvelt – have been my biggest supporters throughout my career, and made it possible for me to pursue the sport from a young age. And most importantly, I would like to thank my wife Kristina who has made many sacrifices in order for me to pursue my dreams.”