Wheelchair Basketball Canada – (August 25, 2017 – CALI, COLOMBIA) The third day of competition at the 2017 Americas Cup in Cali, Colombia saw the Canadian women continue undefeated with a 69-48 win against the United States.

“It’s a really good team win, we were all working as a team towards the same goal. We can tell that things are moving forward really well each game and we’re going to be ready for the gold medal game,” said Cindy Ouellet of Quebec, Que.

The game started with a cautious back and forth between the teams but the Canadian women picked up the pace as the first quarter was drawing to a close to fight to a 10 point lead. Team Canada returned to the court in the second and doubled their score, going into halftime with a 44-24 advantage.

The trend continued in the second half of the game as the United States were unable to work their way past the strong Canadian defense to erase their deficit. Canada closed the game with a 21 point lead and look to bring the momentum to their final game of round robin action on Sunday, August 27 against Argentina. 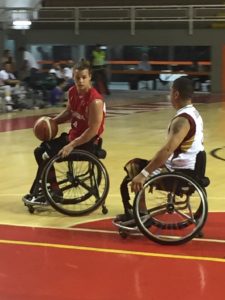 The Canadian men dominated team Venezuela from tip off to cruise to a 91-41 win. Canada opened the game on a 14-2 run thanks to a strong offensive showing from Patrick Anderson (Fergus, Ont.). In the second quarter the Canadian defense kept Venezuela from reaching the paint and widened their lead to 45-22 by halftime.

The Canadians never faltered en route to victory. Anderson led the team in scoring with 33 points and shot 92 per cent from inside the three point line. Nik Goncin (Regina, Sask.) added 14 points for Canada while Ben Moronchuk (Edmonton, Alta.) and David Eng (Montreal, Que.) each added 10.

The Canadian men finish their round robin action on Sunday, August 27 when they play against Argentina at 2pm ET.

View the full schedule and results for the 2017 Americas Cup.

Wheelchair Basketball Canada is the national sport governing body responsible for the organization of the sport in Canada. It is a non-profit, charitable organization that is committed to excellence in the development, support and promotion of wheelchair basketball programs and services for all Canadians from grassroots to high performance. Wheelchair basketball is a fast-paced, hard-hitting, competitive sport in which Canada is held in high esteem around the world for winning a combined six gold, one silver, and one bronze medal in the last seven Paralympic Games. For more information, visit www.wheelchairbasketball.ca.