U SPORTS – TAIPEI CITY, Chinese Taipei (Team Canada) – It was a silver lining to a great night: Canada won a silver medal in swimming and also got a second place finish in artistic gymnastics Monday, on Day 3 of the 29th Summer Universiade.

Swimmer Alexia Zevnik continues to make a splash in the pool, capturing a silver medal in the 200m backstroke at the Taiwan Sport University Arena. Zevnik’s time of 2:09.92 is now recorded as a personal best, beating her last personal best time of 2:11.35 from the Olympic Trials last year.

“I’m super shocked at how it went. I knew it was going to be a close race, so I am so happy with the best time I’ve ever swam at this point in my career. I was amazed! I didn’t even see the wall when I touched it.”, said the gold medalist from Sunday’s 4x100m freestyle relay.

Other finals results from Monday include a seventh place finish in the 50m fly by Katerine Savard and an eighth place finish by Markus Thormeyer in the 100m backstroke.

Savard also qualified for finals tomorrow. The Montréal Carabins will compete in the 100m free finals tomorrow night after recording a time of 55.27. 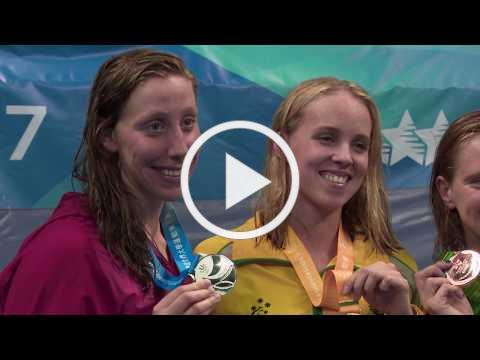 The Canadian women’s gymnastics team won the country’s third medal of the 29th Summer Universiade on Monday night, claiming the silver medal in the team event.

The team accumulated 161.100 total points and as one of the earlier teams to perform was forced to watch and wait to see what colour of medal they would earn. Canada was atop the standings until the final round of teams when Russia, the gold medalists, took to the floor event.

« We’re super excited ! » said gymnast Brittany Rogers. « Coming into that competition we knew we had a strong team. Every year I think Canada gets more in depth and has greater talent coming up, so it’s great to see that we did all that we could today and I think we’re very proud of ourselves. »

Ellie Black led the Canadian contingent with 56.050 total points and qualified for each of the vault, uneven bars, beam and floor individual events to come on August 23.

The Canadian women’s basketball team used a strong second half to come from behind and defeat Portugal 56-45 in the team’s opening game of the Universiade round robin. Canadian captain Paige Crozon led the team with 16 points while adding six rebounds and three blocks. Alex Kiss-Rusk had a strong game on the glass, picking up 11 rebounds. Canada sits tied a top the Pool B standings (1-0) with Japan. The Canadians will next face South Korea on August 22 at 8:00 a.m. ET.

After a convincing opening victory, the Canadians lost 79-71 to Finland on Tuesday. Carleton’s Kaza Kajami-Keane led Canada in scoring for the second straight game, putting up 21 points with seven boards. After three quarters Canada trailed by 30 points, but closed the gap by outscoring the Finns 32-10 in the fourth. Tuesday, Canada will be back in action at 8:00 a.m. ET against Hong Kong, China.

Unlike their opening match, the Canadian men’s volleyball team were on the losing end of a five-setter – losing 3-2 to Switzerland on Monday. Irvan Brar (UBC) led the offence for Canada with 13 kills, four aces and three blocks. In Pool D, Canada is now third with three points. They trail Iran and Argentina, who they will wrap up pool play against. Tuesday the Canadians are back in action against Cyprus. First serve is scheduled for 8:00 a.m. EST.

The Canadian men’s soccer team faced a very high quality opposition on Monday, dropping a 5-0 contest against Japan. Canada has now lost its first two games of the tournament and is still looking for its first goal. The Canada-Malaysia duel on Tuesday, August 22 will be the last game of pool play for the red and white. The kick-off is set at 4:00 a.m. EST.

In a game that meant nothing to either team in the group standings, Serbia, arguably the strongest team in the competition, outplayed Canada. The stronger and more experienced Serbians converted most of their opportunities to earn a 28-2 win.

Canada’s 1-2 mark was good enough for third in Group C. The Canadians will now play an elimination game in two days against Great Britain. Eric Graham and Michael Chapman were the only two to find the net for Canada.

“What can you say?” offered head coach Brian Parillo. “We were completely outclassed in every aspect of the game. That said, we need to keep our eye on the prize which is making it into the top eight and that will be determined in our upcoming game against Great Britain.”

“This game allowed our team to realize what we need to fix before our big game in two days,” Chapman stated. “Despite the score today, I really believe in the guys on this team and I know everyone is going to be ready on Wednesday.”

In diving, Peter Thach Mai was the only Canadian in action at the 1M springboard. His 335.10 preliminary round score did not allow him to qualify for the semifinal. Mai finished in 17th place. ‘’I’m satisfied with my performance,’’ said Thach Mai, a Canada Games and national junior champion this season. ‘’Even though I didn’t reach my goal of making the semifinals, it was great experience to compete against such strong divers.’’

In weightlifting, Ann-Maxime Bouffard took part in the 53 Kg A Final and finished ninth. Caroline Lamarche McClure (second of the 58 Kg B Final) and Edouard Frece-Guerin (fifth of the 69 Kg B Final) were also competing. 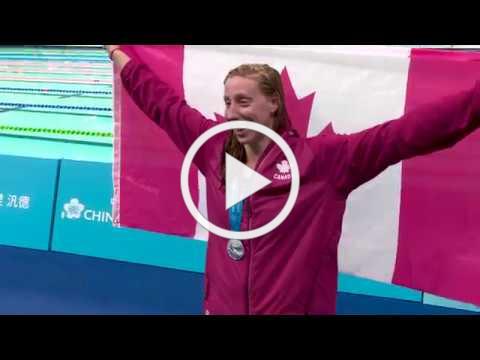