by Skate Canada
View All News 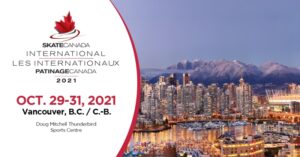 Ottawa, ON: Skate Canada announced today that Vancouver, British Columbia, will host the 47th Skate Canada International. The event will take place at the arena at Doug Mitchell Thunderbird Sports Centre from October 29 – 31, 2021.

“Skate Canada is thrilled to welcome some of the best skaters from around the world to Vancouver for the 2021 Skate Canada international. We are looking forward the 2021-22 season and creating memorable moments for all skating fans,” said Debra Armstrong, CEO, Skate Canada. “We are thrilled to be working with the city of Vancouver and Doug Mitchell Thunderbird Sports Centre again next year to create an event all participants will enjoy.”

“Sport Hosting Vancouver is proud to continue our relationship with Skate Canada with the hosting the 2021 Skate Canada International,” said Michelle Collens, Senior Manager, Sport Hosting Vancouver. “Our combined hosting history will allow us to creatively reimagine the event experience and ensure the confidence to deliver live events once again. We look forward to welcoming both participants and spectators back to British Columbia when it is safe to do so.”

Each skater/team can be assigned a maximum of two events. Skaters are awarded points based on their placements at their events. The top six from each discipline (men, women, pair and ice dance) qualify for the ISU Grand Prix of Figure Skating Final.

The inaugural Skate Canada International was first held in 1973 in Calgary and the event was added to the ISU Grand Prix of Figure Skating in 1995, the year the series began. Vancouver has been a longtime partner of figure skating, hosting world renowned events such as the 2010 Winter Olympic Games, the ISU World Figure Skating Championships in 2001 and 1960 and the 2018 ISU Grand Prix of Figure Skating Final. This is their second time hosting Skate Canada International, they previously hosted in 1978.