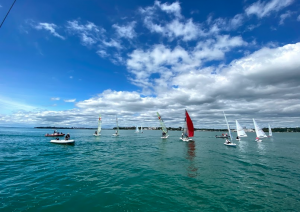 This training event was an opportunity to create an intense racing environment focussed on enhancing racing skills for our Olympic hopefuls during a time when attending international competitions is a challenge. It also provided an opportunity to bring together the Canadian Sailing Team, Canadian Sailing Development Squad and Canadian Sailing Youth Squad to race and learn all together. This created tremendous value for not only the development sailors to test their skills against Canada’s best, but also the CST sailors as they could provide guidance and mentorship to the next generation of Olympic athletes.

Laser Standard, Laser Radial and 49er and 49erFX fleets took part in the 9 day event. The event schedule was set in such a way that the 49er/FX fleet raced over the first 8 days, the Radial fleet raced the first 5 days, the Laser fleet raced the last 5 days with one transition day that coincided with the 49er/FX rest day. This ensured that there were never more than 45 competitors in the boat park at any given time.

Sail Canada worked closely with KFL&A Public Health, the City of Kingston and the Sail Canada Medical Task Force to ensure everything was done to make the event a safe and successful one during these challenging times.
Extensive Covid-19 mitigation strategies were put in place including a Covid-19 action plan in the case that someone did begin to develop Covid symptoms or test positive.

All participants (athletes, coaches, support staff) were required to sign daily attestation forms, have their temperatures checked, wear a mask and physical distance while on shore in the boat park and while launching.
It is Sail Canada’s goal that this event can be used as a template to assist in running safe sailing events during these Covid-19 times. A thorough debrief of the event will be done with the organizing staff and the Chief Medical officers who were on site. We hope to learn as much as possible from the event.

A big thank you to Sport Canada, Wind Athletes, KFL&A Public Health, the City of Kingston and all the coaches and competitors who followed the Covid-19 guidelines and made this a safe and successful event.