Synchro Canada – OTTAWA, July 12, 2017 – Following successful results at several of the stops on FINA’s Synchronized Swimming World Series this year, Synchro Canada’s athletes are aiming for medals at the 2017 FINA World Championships. The event is taking place in Budapest, Hungary, from July 14-30, 2017. The Synchro competitions run July 14-22 at the Városliget Park.

Fourteen athletes will carry the Canadian colours for Synchro Canada in Budapest. ‘’We couldn’t ask for better representatives of our sport than the athletes who will compete in Hungary,’’ said Julie Healy, Chief Sport Officer, Synchro Canada. ‘’They are extremely dedicated, have been well prepared by their coaches, and have already shown this year that they can compete at the highest level with the best in the world.’’ 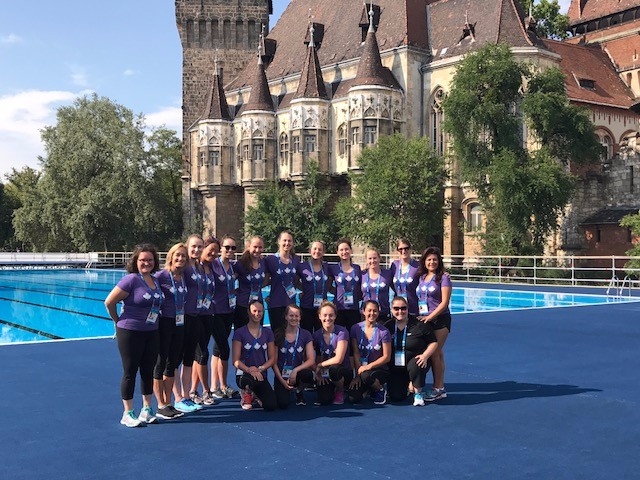 The busiest Canadian swimmer will be Montreal’s Jacqueline Simoneau, competing in six different events in three different categories (solo, duet and team). She has had a strong international season to date in solo, winning medals in all four of her events on this season’s circuit. Simoneau is coached in her solo events by Johana Vasquez.

Simoneau will also combine with her new duet partner, Calgary’s Claudia Holzner, to challenge in the duet. The two turned heads with their accomplished performances in their first competition of the year, winning a silver medal. With additional training time together, the duo coached by Leslie Sproule, is looking forward to an even more impressive outing at the World Championships.

Canada will have another strong entry in the mixed duet. Isabelle Blanchet-Rampling, 31, and Robert Prévost, 37, both from Montreal, QC have already won two medals internationally this year, gold at the Canadian Open and silver at the Synchro America Open. They are coached by Johana Vasquez and have their sights set on a medal.

Twelve athletes from across the country are slated to compete in the team event. Slightly different configurations of swimmers will swim first in the Technical Routine and then in the Free Routine. The 2017 squad includes several returning members of Canada’s gold medal winning team from the 2015 Pan American Games who just narrowly missed qualifying for the 2016 Olympic Summer Games in Rio. The veterans are joined by new members of the squad who bring their own energy and enthusiasm to the routines.

CBC is the official Canadian broadcaster for the FINA World Championships, recently signing a four-year broadcast partnership with FINA. A livestream of the final events will be carried on the CBC website with detailed coverage on CBC’s Road to the Olympic Games. Visit www.cbcsports.ca for more information and for the broadcast and streaming schedules.

See the full schedule of the 2017 FINA World Championships here. For a summary chart of which team members and events Canada will be participating in Budapest, click here.