Manitoba Badminton Association – Stefan Carter Awarded MBA’s Sport for Life Award
On Wednesday November 7th, 7:30 pm at River Heights Badminton Club (Grosvenor School), the MBA will be awarding Dr. Stefan Carter with the Sport for Life Award recognizing him as an active and avid badminton player who is still playing regularly at the age of 90.
Dr. Carter is an inspirational man who has lived a life so full of experiences, and has learned to love, play, and compete in badminton since 1981. Now at the age of 90, he attends the River Heights Badminton Club, the MBA Access Program and Little Dragons Badminton Club in order to try and advance his skills. He competed in the 2017 Canadian Masters Badminton Championships in Winnipeg, MB as one of only 3 players entered in the 85+ category. He also had the distinction of being the oldest player competing at the tournament. 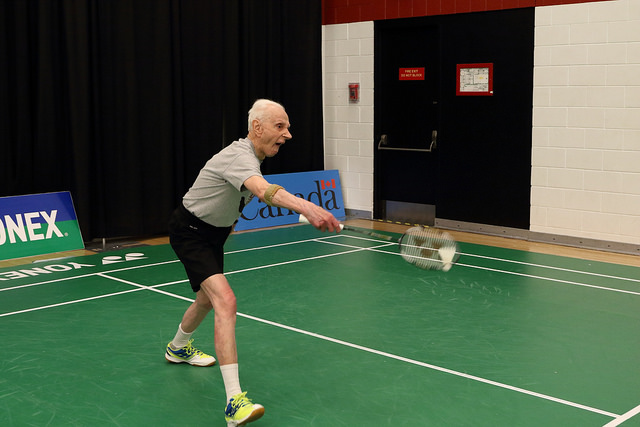 Dr. Carter decided in 1981 that he would like to take up the sport of badminton and went to play at the River Heights Badminton Club. After playing he “was hooked and addicted” to badminton. He has spent the time since playing in many different clubs throughout Winnipeg trying to improve his badminton skills. He credits many people with help along the way including Archie Chawla, Greg and Lindsay Blamey, Khan Mai and Dan Savard. One person in particular he credits is Mike duBois who has “never given up on me and always plays with me”.

One of the things Dr. Carter talks about when talking badminton is the spirit of badminton people and how not only is badminton a great exercise but the social part of interacting with others on the court is “more important than you think”. He says that playing in the Canadian Masters was a fantastic experience and would have been even if there wasn’t badminton involved because of the people he met.

Dr. Carter believes that being active is important and tries to do this by playing several times a week. His current goal in badminton is: “making one or two good shots in an evening makes my day!”

Dr. Carter is not only an avid badminton player he is also a remarkable individual. He survived the holocaust to make his home in Winnipeg in 1948. He became a doctor and served on the faculty staff at the University of Manitoba for over forty years as a vascular specialist. He is featured in the Canadian Museum for Human Rights and has written a book chronicling his life’s experiences.

Dr. Carter definitely shows that badminton is a Sport for Life. The MBA and the badminton community are delighted to recognize Dr. Stefan Carter with the MBA Sport for Life award as he is a role model and inspiration for all to maintain an active lifestyle for healthy living.

Media are encouraged to come for photos and interviews with Dr. Stefan Carter and the MBA Board of Directors at the award ceremony on Wednesday November 7th at 7:30 pm. It will be taking place at the River Heights Badminton Club in the Grosvenor School (1045 Grosvenor Ave.).