Canadian Sport Centre Manitoba – Payton Ryz took the top spot at the Triple Threat Junior Elite Triathlon this weekend at Birds Hill Park. The event was a qualifier for the 2017 Canadian Age-Group World Championship Team. Ryz, a 15-year-old Vincent Massey student, said she felt strong and prepared for the race. “Physically and mentally I was feeling ready to race as I had just competed the weekend before, so I felt I was sharp and tuned. I was very excited to race against athletes from the other provinces who I hadn’t competed with since last season. I was excited to talk to them as well as seeing how we all stack up to one another a year later.”

During the event, Ryz was second out of the water, and managed to close in on the leader during the bike. “After about 400 metres running together, I started to pull away,” she said. “I’m very pleased with my performance, and it was great to see all my fellow competitors after the race.”

But this weekend’s win isn’t Ryz’s only reason to celebrate. Earlier this month, she was selected as one of eight young women to represent Canada at the CAMTRI Continental Championships in Iowa on July 9. Ryz will face off with top junior female triathletes from North, South and Central America. According to Triathlon Manitoba, “This critical event on the international race calendar will also serve as a selection race for the 2016 ITU Junior World Championships slated for Cozumel, Mexico, September 16.”

Ryz trains with Manitoba Triathlon Centre’s high performance group. The team, led by Gary Pallett, always trains as a group. “We swim every morning from 6:30 to 8, either run or bike after school – sometimes both – and do strength training with Jérémie [from the Canadian Sport Centre],” the athlete said. 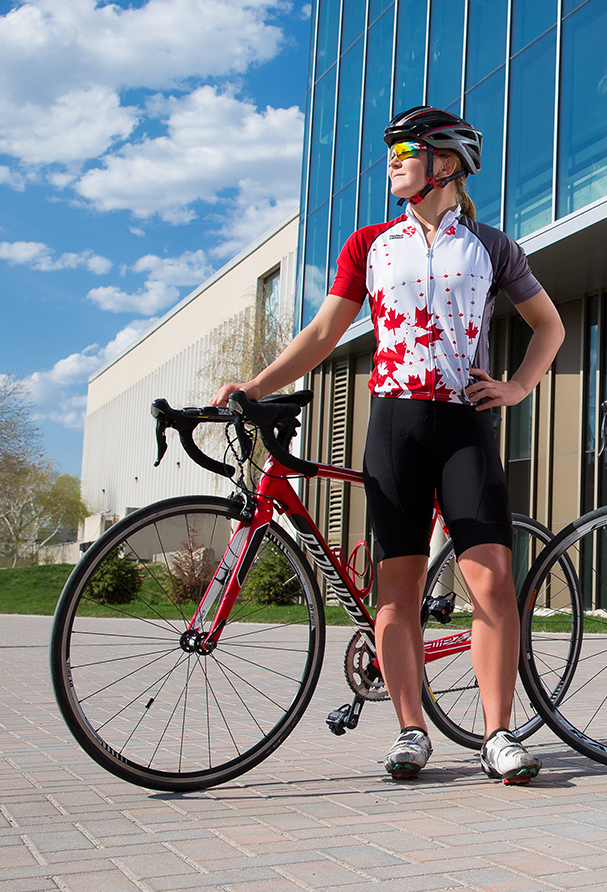 Q&A with Payton Ryz
Q: Triathlon is an individual sport. Do you find it challenging to train in a group while still putting time toward your particular areas of focus?

A: For the most part, training with our teammates helps us to get faster. I’ll pick a focus every morning, work on my catch or my pull, and concentrate on that. My teammate Kyla Roy and I push each other every day. She’s always positive about training, so I really look up to her. She went to World’s last year, and I hope one day I can do that too.

Q: When training gets tough, what’s the driving factor that makes you continue?

A: I take a step back and remember what I love about triathlon and why it makes me happy. I realize that training can be hard sometimes, but you’ve got to push through it – race season is coming and you’ve got to put in those hours.

Q: What are you most afraid of?

A: I’m afraid of burning out, of working too hard now and not being able to sustain this training load. I’m afraid that I’ll want to quit training. I don’t want that to happen – I want to keep loving what I do.

Q: What’s your pre-race routine before a big event?

A: The night before, I envision my race: how I want it to go, how I want it to feel. I always have oatmeal. I do my running warm-up by myself so I can envision how things are going to go and talk myself through it.

A: The rush from training and pushing yourself that hard. And racing is a ton of fun, too – it’s probably my favourite part of being a triathlete.

About CSCM:
The Canadian Sport Centre Manitoba (CSCM) was created as one of the many legacies of the 1999 Pan American Games held in Winnipeg. Today, CSCM is the hub for high performance sport in Manitoba. A proud member of the Olympic and Paralympic Sport Institute Network, CSCM works to provide a world-class, multi-sport daily training environment for athletes and coaches through integrated services and programs in the fields of physiology, strength and conditioning, nutrition, psychology and support services.