Cycling Canada  – WINNIPEG, July 31, 2017 – The cycling events at the Canada Summer Games in Winnipeg, Manitoba, opened on Sunday with the women’s and men’s XCO mountain bike races.  Quebec riders took both titles at this first medal event of the Games.

Held at Bison Butte outside of Winnipeg on a six kilometre course built for the Games, racing took place under hot and sunny conditions; hot enough that officials knocked a lap off the planned six for the men, with both men and women racing five laps.  While Manitoba is not known for lengthy climbs, the course designers made up for it with multiple short, steep climbs and technical descents.

Anne-Julie Tremblay of Team Quebec became the first gold medalist of the Games with a dominating performance in the women’s race.  Tremblay, who raced at European World Cups in national team colours earlier in the season, went to the front on the first lap, chased by Team Ontario riders Jenn Jackson and Soren Meeuwisse.  Tremblay won with a time of one hour, 30 minutes and one second, 45 seconds ahead of Jackson, the national champion for Under-23 women.  Meeuwisse finished a further 23 seconds in arrears.

“I’m very happy to take the first gold medal of these Games for Team Quebec,” said Tremblay.  “I think now for the Team Relay this will give us a lot of motivation, because Marine [Lewis, Team Quebec] also had a good race in fourth place.  The course was very good and they did a lot without a lot of features to work with.” 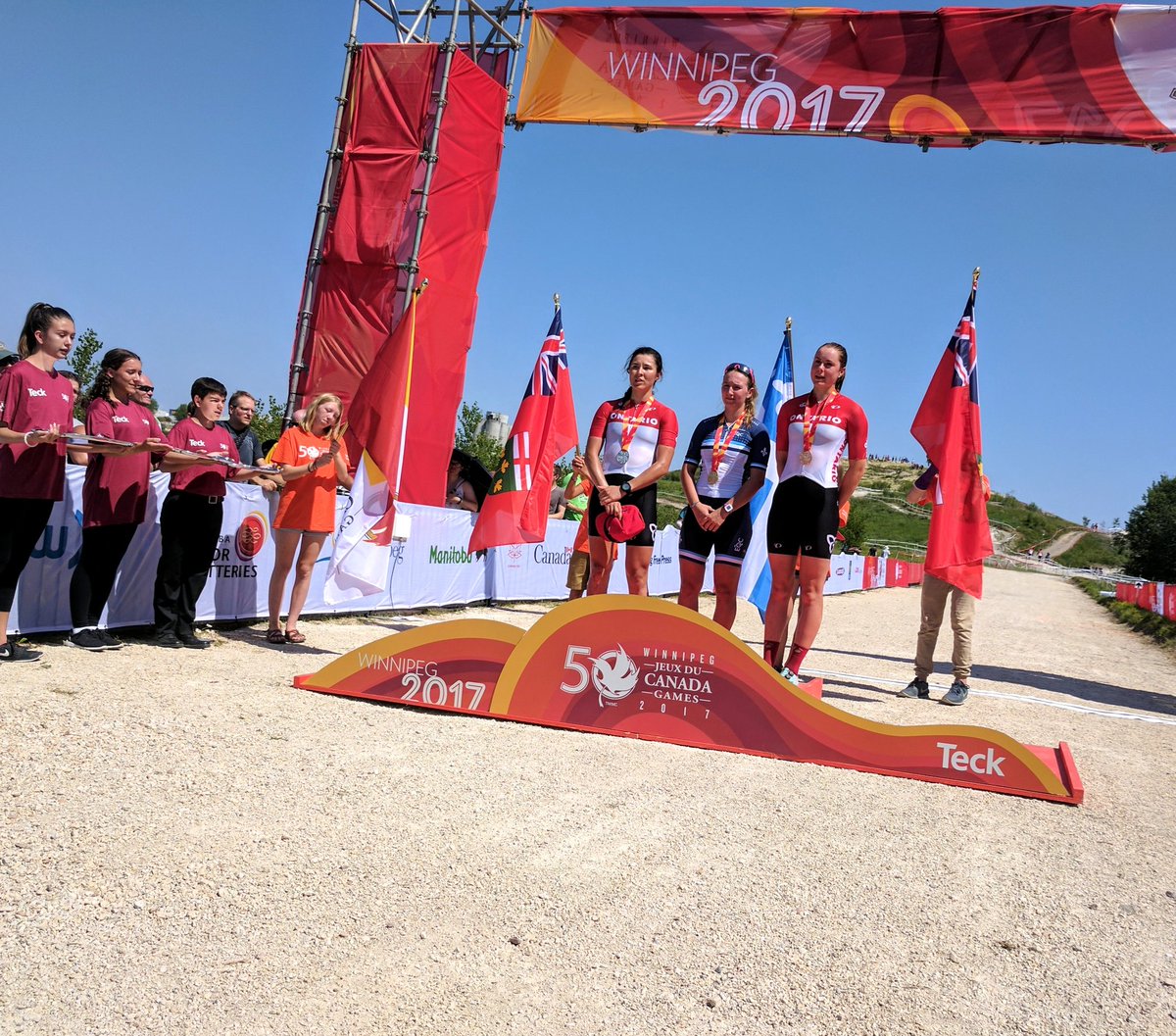 Tremblay’s Quebec team mate, Felix Burke, won the men’s race in a similar fashion, with a time of one hour, 17 minutes and one second.  The silver medal went to Brody Sanderson (Team Ontario), the national Junior men’s champion, only 17 seconds behind Burke.  Team Quebec’s Felix Belhumeur finished third, a further ten seconds behind.

“I’m over the moon,” said Felix Burke, “this is a really special win for me.  I’m so excited, and I wanted to pay back my team, my sponsors and my family.  I couldn’t have gone harder and it’s always a good feeling to cross the finish line and know that you gave everything you had out there.  The heat was a huge factor.  Starting on the third lap I was alone on the front, but I didn’t want to let up and I could feel the heat … and I could tell it was going to be a sufferfest.”

Josh Peacock, Competitions Coordinator at Cycling Canada, said “it was an action packed day and heat definitely played a factor out here with an exposed course and no wind in close to 40 degree [Celcius] heat with the humidex.  Athletes were tested for sure and they didn’t disappoint the fans.”

Mountain bike competition continues on Tuesday with the Team Relay.