Pentathlon Canada – The 2016 Provincial Championships for Modern Pentathlon will be held on Sunday, June 5th in Orangeville, Ontario.

Modern Pentathlon is a unique and historic Olympic Sport that requires athletes to execute both skill and athleticism in five very different disciplines – fencing, swimming, equestrian show jumping, and finishing with an event that combines running and laser pistol shooting. Modern Pentathlon is arguably one of the most physically and mentally demanding individual sports in the international competitive landscape.

Despite how this sport defines the Olympic ethos of higher, faster, stronger –  athletes on horseback clear high jumps, run grueling repetitive 800 metre courses between  target  shooting, and must do all of these events back-to-back in one day – if you ask many Ontarians or Canadians about the sport they will say they have never heard of it.

But participation is on the rise, notably in Ontario. This is in part due to greater Canadian presence and performance on the international scene. As well, Modern Pentathlon was a sold out event at the 2015 Pan American Games in Toronto, where many first time spectators of the sport were amazed by athlete performances and held their breath during a sprint to the finish battle between two Canadian Olympians, Donna Vakalis and Melanie McCann, at the close of the event. At that moment, one narrowly eclipsed the other to secure a coveted spot for Rio.

Both are now in heavy preparation for the 2016 Olympic Games, yet Vakalis is still making sure she is in Orangeville at the Provincial Championships, stopping in from a hectic international competition schedule and a recent World Championship event to participate and support at the grass roots.

Donna Vakalis comments on the upcoming Ontario Championships:
“After a busy season of international training and competition leading up to Rio, it is really great to have the opportunity to be back in Ontario for our athletes to compete at provincials. I love the chance to come back home and participate with all the up and coming athletes as I see the sport growing, and getting more competitive internationally, at the same time.”

The exciting closing events of the championship – equestrian show jumping and the combined run and shoot – will be held at Silver Fox Equine.  “It is a fantastic opportunity to be involved in the Ontario Provincial Championships,” says owner Christy Oukes, “our team has been hard at work, and we can’t wait to support the athletes and welcome as many spectators as we can to come and see this great event!”

Pentathlon Canada governs the Olympic sport of Modern Pentathlon in Canada, supporting our provincial associations and national team athletes in building a supportive environment for our sport. Pentathletes compete in five sports – fencing, swimming, equestrian riding, and a combined run and shoot – in a one-day competition. 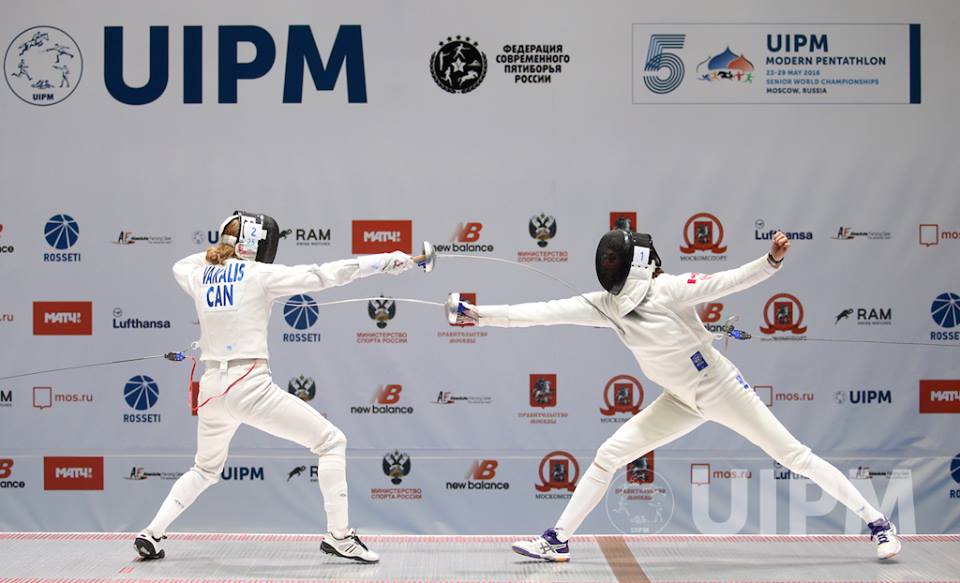 Donna Vakalis fencing in the bonus round at the 2016 World Championships in Moscow, Russia.