One Canadian Skater Headed to Las Vegas for 2020 Skate America

by Skate Canada
View All News 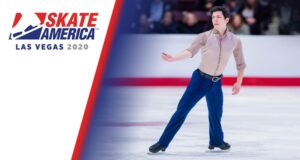 Skating to Ed Sheeran’s Perfect for the second straight year, the 28-year-old Messing, who trains in Edmonton, Alb., scored 92.40 to put himself in medal contention heading into the Saturday’s free program.

Two-time world champion Nathan Chen of the United States leads after posting a stunning 111.17. Fellow American Vincent Zhou is in second spot at 99.36.

“It was really exciting to perform again, but my legs were a little shaky in the second half of the program,” Messing admitted. “I’m really happy with the way I skated. It felt so great to get back out there.”

Messing, a three-time national medallist, is the only Canadian competing at Skate America. He finished fourth at this event a year ago.

Skating competitively for the first time since February, Messing left some points on the table with a couple of mistakes Friday. He put a hand down on his quad toe, triple toe combination and had a slight trip – or an “oops”, as he called it – on his step sequence. He landed his triple Axel and triple Lutz cleanly to stay within striking distance of Zhou.

“I have to admit, the nerves affected me a little bit, but I think that can be expected,” he said. “Getting to perform again, that’s what we live for. I missed having those butterflies.”

Skate America, which is being held without fans in attendance at the Orleans Arena, is the first stop of the condensed Grand Prix circuit. Skate Canada International, which was scheduled to be held next week in Ottawa, Ont., was recently cancelled due to the COVID-19 pandemic. Internationaux de France, slated to be held next month, was also cancelled, leaving stops in China, Russia and Japan to round out the Grand Prix schedule.

No Canadians are scheduled to compete internationally after this week.

“With Skate Canada getting cancelled, my heart broke for all my teammates,” he added. “I am representing all of them here. This one went out to Nam (Nguyen) and all of Team Canada. This week is for you.”