“I’ll never forget this, it feels amazing,” Walker, 24, said of the title, which she won after incurring just one rail and a single time fault over two days and three courses aboard Falco van Spieveld (Toulon x Lys de Darmen), her 13-year-old Belgian Warmblood gelding. 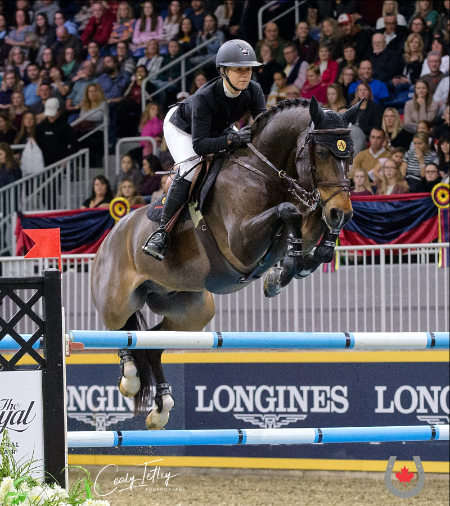 Walker earned the 2018 title after besting a field of 18 top Canadian show jumping athletes who took to the Coca-Cola Coliseum. The courses were set by FEI Level 4 Course Designer Alan Wade of Ireland, who was lauded for his intelligent tracks at the FEI World Equestrian Games in Tryon, NC last month.

Her climb to the top began on Nov. 2 in the $25,000 Canadian Show Jumping Championship – Round 1, held as a speed phase with jumping faults converted to added time. One of only three riders to go clear over the tricky 13 jumps and 15 efforts, Walker’s time of 64.37 seconds gave her a solid Round 1 win over the closest challenger – fellow young gun, Ali Ramsay, 26, of Victoria, BC. Riding Casino (Casiro 3 x Ludwig von Bayern), her 10-year-old Oldenburg gelding, Ramsay stopped the clock at 66.47 seconds.

Following championship format, all times from the initial speed round were converted into scores, with Walker earning a perfect zero, and all other competitors being attributed with penalty points representing each second they exceeded the winning time. This meant there was less than a rail of wiggle room between many of the riders heading into the $100,000 Canadian Show Jumping Championship – Round 2 on Nov. 3.

Round 2 consisted of two phases, and kicked off with another of Wade’s well-thought out tracks featuring 12 obstacles and 14 jumping efforts – including a one-stride combination right up against the stands that proved distracting for some horses. With only six horse-rider combinations to be invited into the second phase, the pressure was on.

When Ramsay experienced challenges at the combination adjacent to the crowd, and Walker lowered a skinny vertical late in the course, the door opened for 2017 champions, Amy Millar of Perth, ON and her 2016 Rio Olympic partner, Heros. A foot-perfect round from Millar and the 11-year-old Belgian Warmblood gelding (Canadian River x Clinton I) owned by AMMO Investments, gave them the lead over Walker heading into the second phase, with just 0.87 points separating the two leading ladies.

“It was definitely a pressure situation, because there was really no room for error,” Walker said of her mindset heading into the final phase in Round 2. “But, I just tried to keep it cool and ride it as I usually would.”

It all came down to a slightly shortened course of 10 obstacles and 12 efforts with a tight time allowed of 57 seconds. With riders competing in reverse order of standing, Walker went just before Millar, leaving all the rails up, but exceeding the time by 0.13 seconds for a final combined score of 5.00 penalty points. In a nail-biting finish, the crowd was holding their breath when Millar and Heros, the last to compete, set out on course. When they lowered a rail at the ‘a’ element of a double combination at fence five, Walker was guaranteed the title, while Millar took the Reserve Championship on a total score of 7.13. 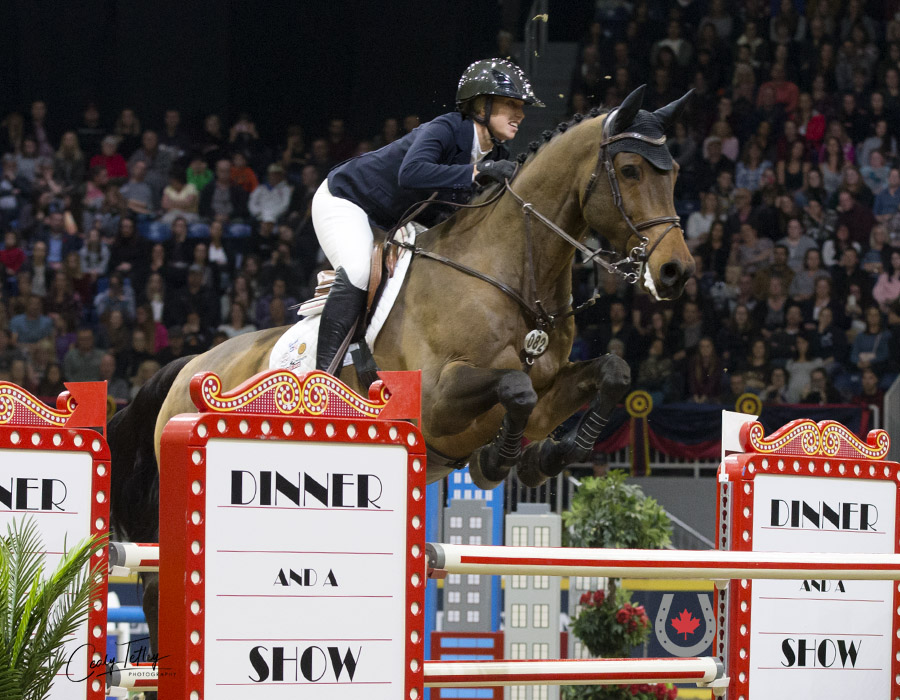 “This is a very humbling sport, so I never expected (to win), but we were hopeful and positive, and the horse has been feeling amazing all week, so I’m glad we could pull it off and luck was on our side today,” said Walker, who began competing with Falco van Spieveld in early 2017. By the end of the season, they had racked up top finishes, including a major win at the 1.60m level at the CSI 3* Pennsylvania National Horse Show in October. “I’m very excited for my whole team, and I think the horse deserves a title like this, because he’s just such a special boy.”

No stranger to success at The Royal Horse Show, Walker won the Under 25 (U25) National Championship in 2017. “The U25 series is a good transition to get in the ring for a high pressure situation. You practice water jumps and different situations, so it was great preparation for today.”

A strong supporter of the U25 series as the EC Jumping Talent ID Program Advisor, Canadian Olympian Beth Underhill of Schomberg, ON proved she is the ultimate role model, putting in impressive performances aboard Sandy Lupton’s 11-year-old Hanoverian gelding, Count Me In (Count Grannus x Sherlock Holmes) to finish the 2018 Canadian Show Jumping Championship in third place overall.

As the Champion and Reserve Champion, Walker and Millar have earned their berth forward to the international division at the Royal Horse Show, which kicks off on Nov. 7. Also invited based on their FEI world ranking positions are fellow Canadians, Erynn Ballard of Tottenham, ON, Ian and Jonathon Millar of Perth, ON, and Keean White of Rockwood, ON. In addition, the EC Jumping High Performance Committee selected Ali Ramsay of Victoria, BC and Underhill to fill two wild card slots.

For a complete list of results from the $125,000 Canadian Show Jumping Championship, and the full Royal Horse Show schedule, visit www.royalfair.org.