Held in the beautiful Saguenay region north of Quebec City, the out-and-back course took the riders on a twisting, rolling course with multiple climbs. The Elite/Under-23 women raced 25.14 kilometres, while the Elite/Under-23 men did 37.2 kilometres.

Kirchmann, the 2014 time trial champion, was one of the favourites, along with defending champion Karol-Ann Canuel (Boels Dolmans), Kirsti Lay (Rally Cycling) and Jasmin Duehring (Twenty20 p/b SHO-AIR). Riding her first time trial of the year, Kirchmann caught her minute rider, Sara Poidevin (Rally Cycling) – who won the Under-23 title – and finished with a time of 36:12.76, 8.12 seconds ahead of Canuel, with Lay in third and Duehring fourth. Rally Cycling swept the Under-23 podium, with Poidevin joined by team mates Gillian Ellsay and Katherine Maine. 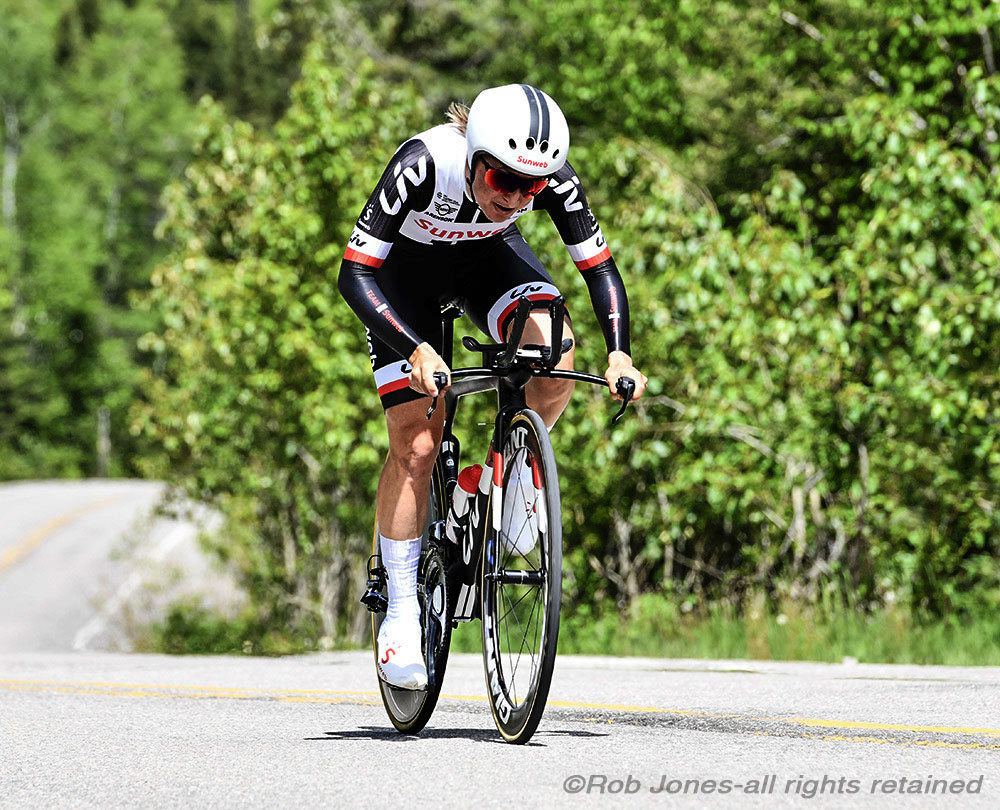 “I’m very happy to be able to claim another title today,” said Kirchmann. “I felt super strong racing the Women’s Tour, but this was my first time of the season and I didn’t know how I was going to recover after the race and the travel from Europe, so I was happy to find that I felt so strong today. It was a really tough course, with climbing the whole way out, and then on the way back it was a headwind, so it still felt like you were climbing!”

In the men’s race, Tuft showed once again why he is the greatest time trialist in Canadian history, defending his title and adding to his own record with an 11th title; his last since he will be retiring at the end of this season. Tuft finished with a time of 46:38.26, 35.9 seconds ahead of Rob Britton (Rally Cycling), with Alex Cataford (UnitedHealthcare) taking third, 1:42.74 back. Adam Roberge finished fourth overall and led a Silber team sweep of the Under-23 podium, joined by teammates Nickolas Zukowsky and Adam Jamieson; both nearly a minute back on Roberge. 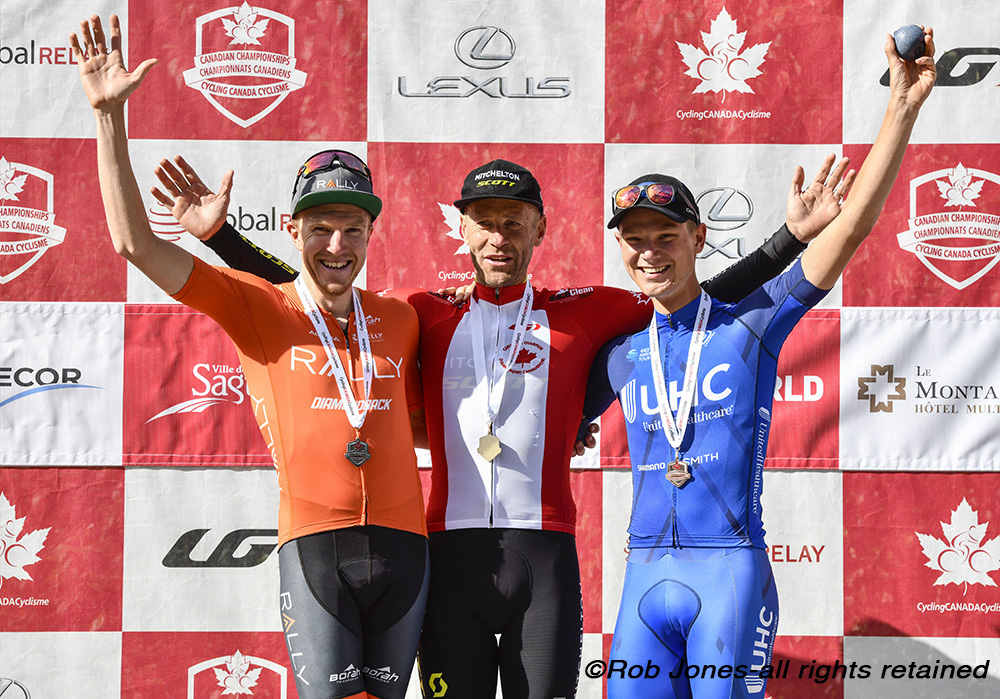 “I remember my first one, in 2004, so to win my 11th one here is pretty special,” said Tuft. “At Beauce last week every day kept getting better for me; I was really fatigued after the Giro. But after that and some rest, I knew things were good again; I felt that good old feeling again. I loved the course and thought it covered all the bases; there was a lot of climbing, a lot of wind, high speed sections … I think it was a real time trial.” 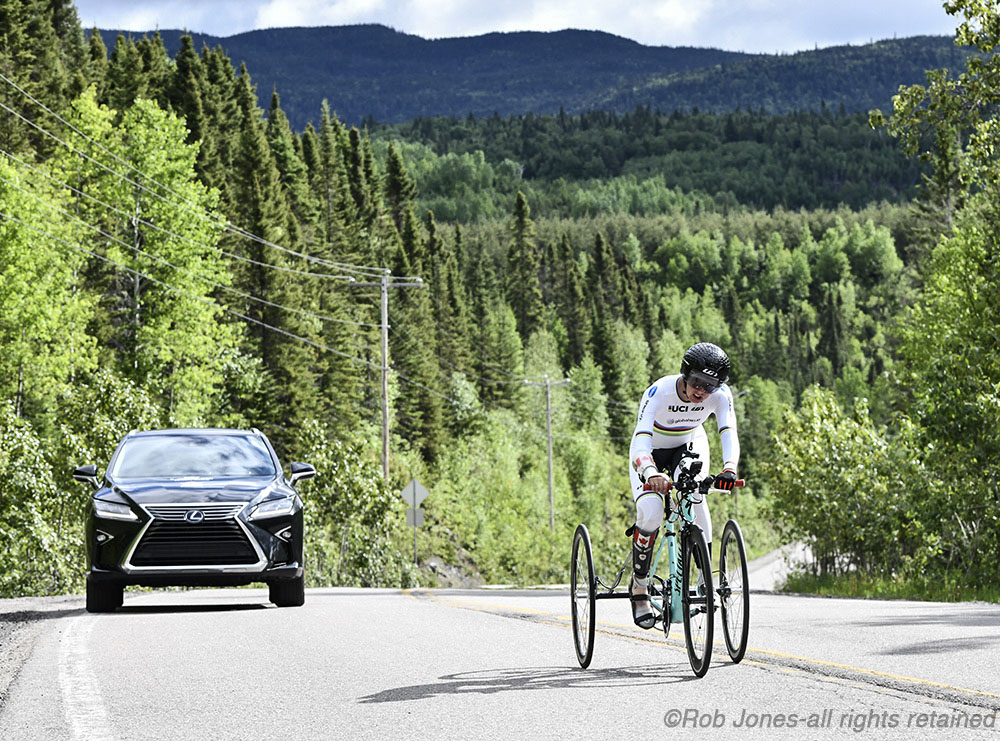 The Championships continue on Friday and Saturday with the Road Race competition, and conclude on Sunday with the Criterium.

About Cycling Canada
Cycling Canada is the governing body for competitive cycling in Canada. Founded in 1882, Cycling Canada aims to create and sustain an effective system that develops talented Canadian cyclists to achieve Olympic, Paralympic, and World Championship medal performances. With the vision of being a leading competitive cycling nation by 2020 celebrating enhanced international success, increased national participation and world class event hosting, Cycling Canada manages the High Performance team, hosts national and international events and administers programs to promote and grow cycling across the country. Cycling Canada programs are made possible through the support of its valued corporate partners – Global Relay, Lexus Canada, Mattamy Homes, Louis Garneau, lululemon, 4iiii, Argon18 and Bear Mountain Resort – along with the Government of Canada, Own The Podium, the Canadian Olympic Committee and the Canadian Paralympic Committee.