For Kingsbury, the season ends the same way he opened it by winning a dual moguls event. Kingsbury won the first FIS World Cup of the season in Ruka, Finland.

The 23-year-old has won a total of eight Canadian Mogul Championship titles – five in single moguls and three in dual moguls – including the mogul event that he won yesterday.

“It was a tough day for us out there today with the weather and all the shade on the course because of how the sun was positioned. We couldn’t see much coming down,” said Kingsbury. “I’m glad it’s over and that I was able to win. Each of these victories means a lot to me. I’ve had a great season overall and I’m happy with how consistent I was. Winning both national championships is icing on top. I’ve accomplished a lot this season and now I can rest a bit before preparing for our off-season.”

Kingsbury defeated teammate Zac Hoffman (North York, ON) in the final by a score of 25-10 to win the title. In the bronze medal match, national team member Gabriel Dufresne (Repentigny, QC) defeated Alexandre Lavoie of the Quebec Provincial Team, by a score of 35-0.

Robichaud has now won five national titles overall of her own with four of them coming in dual moguls. The veteran of two Olympic Games defeated Andi Naude (Penticton, BC) by a score of 27-8 for the gold medal. Their teammate, Alex-Anne Gagnon (Terrebonne, QC), defeated Maxime Dufour-Lapointe 20-15 for bronze.

“It was a tough day out there with how icy it was, but we gave it a go and it turned out well for me,” said Robichaud. “This title means that I can still do it and compete. It’s nice to end the season on such a high note. I’m really happy I pushed through during tougher conditions. It’s nice to compete against the provincial athletes too. I was just like them over a decade ago and in their position. I remember really enjoying going up in duals against the National Team. I hope they loved competing with us.” 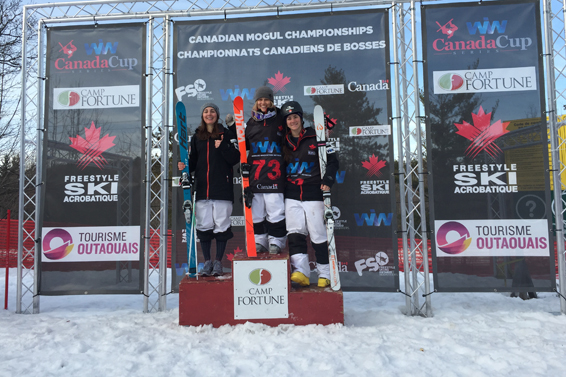