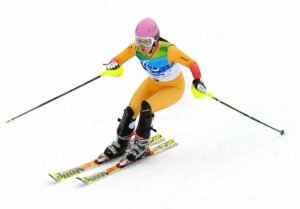 Wisniewska is a three-time Paralympian in the sport of Para alpine skiing, winning a total of eight medals (two silver at Nagano 1998, two silver and two bronze at Salt Lake City 2002, and two bronze at Vancouver 2010). After first retiring from the sport in 2003, she made a successful comeback for the chance to compete on home soil at the 2010 Games. She was inducted into the Canadian Paralympic Hall of Fame in 2017.

Originally from Calgary, she now lives in Montreal where she works as a Game Plan manager, supporting Canadian high-performance athletes throughout each stage of their careers.

“I am so thrilled to be joining the Canadian Paralympic Team as the newly named assistant chef de mission for the upcoming Paralympic Winter Games,” said Wisniewska. “I hope that my years of experience as an athlete, a mentor, and someone who has worked in the Canadian sport system will help elevate the team in Beijing. I am so stoked that there are only 100 days to go! I know and remember this exciting and critical time so well and am sure every one of our athletes is doing all they can to be at their very best.”

As assistant chef, Wisniewska will bring her expertise and experience to Canada’s athlete leadership team for the Beijing 2022 Games alongside chef de mission Josh Dueck, supporting the athletes, coaches, and support staff. Set to be based in Canada for the Games, she will also be a key participant in domestic activities.

“The excitement is ramping up with only 100 days before the 2022 Paralympic Games!” said Josh Dueck, chef de mission, Beijing 2022 Canadian Paralympic Team. “We have seen significant gains with the athletes as they prepare for the Games and feel we have an excellent opportunity to showcase the power of sport to the world. However, as the saying goes, it takes many hands to make a light load. With that in mind, it is with great joy that we are welcoming my friend, former teammate, and Paralympic leader Karolina Wisniewska to support our athletes as assistant chef de mission. We are so thankful for her leadership, wisdom and passion.”

The Beijing 2022 Paralympic Winter Games will take place March 4-13, 2022. Canada is set to participate in all five Paralympic winter sports – Para alpine skiing, Para nordic skiing (biathlon and cross-country), Para snowboard, Para ice hockey, and wheelchair curling. The nation is coming off a record-breaking Paralympic Winter Games performance at PyeongChang 2018, with 28 total medals. Approximately 50 athletes are expected to represent Canada at the Games, with the official team to be announced over the next few months.