Evi was born into the dressage world as the daughter of German Olympian Josef Neckermann. Just one year after moving to Canada from West Germany in 1981, Evi represented her new home country at a precursor to the World Equestrian Games. In 1984, she made her Olympic debut in Los Angeles riding Little Joe under the red and white banner.

While keeping her eyes trained on excellence, Evi opened her arms to all of Canada to introduce them to the then-little-known sport of dressage. Alongside her husband, Hans Pracht, she coaxed the World Championship out of Europe for the first time in 1986. The star-studded event was held at the Pracht’s facility, International Equestrian Sport Services Ltd., in Cedar Valley, ON, bringing world-class dressage to Canadian spectators for the first time. Evi herself competed in the World Championship aboard the Swedish Warmblood gelding Emirage, placing in the top three.

It was partnered with Emriage that Evi skyrocketed onto the podium. First, the pair helped the Canadian Dressage Team win gold at the Indianapolis 1987 Pan American Games before capturing team bronze at the Seoul 1988 Olympics. Evi’s last appearance riding for the maple leaf was at the 1991 World Cup.

Throughout her athletic career and for decades after, Evi coached other athletes riding for Canada at the highest level, including: her daughter, Martina Pracht, who took up the reins on Emirage for the Barcelona 1992 Olympics; four-time Canadian Olympian and Evi’s Seoul Olympics teammate, Ashley Holzer; and Lima 2019 Pan American Games team and individual gold medalist, Tina Irwin. Evi’s unwavering passion for the sport, immense depth of knowledge and constant positivity made her presence ringside much sought after and cherished.

“Evi left an indelible mark on our community and her loss is deeply felt nationwide,” said EC CEO, Meg Krueger. “As an athlete, coach, competition organizer and tireless promoter, she fashioned dressage in Canada into the prosperous sport it is today. We are glad to see many of her students still in the ring, carrying on her teachings and legacy for generations to come.”

Evi is survived by her daughter, Martina, and granddaughter, Sabrina von Buttlar, who carries on the family equestrian tradition in the hunter/jumper ring. 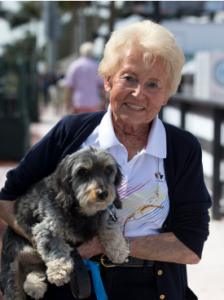 PHOTO – Equestrian Canada offers sincere condolences to the family and friends of the late Eva Maria Pracht of Stouffville, ON, who passed away on Feb. 15, 2021, at the age of 83.
PHOTO CREDIT – Cealy Tetley