Moncton, May 23, 2016 – Manitoba’s lone badminton player Olivia Meier took home Gold & Silver in the 1st Canadian Para-Badminton Championships held this past weekend in Moncton NB in conjunction with the Jr & U23 National Badminton Championships.  Jo-Anne Peltz, a local physiotherapist, made the trip to become certified by Badminton Canada as an assessor for para-athletes.  Justin Friesen, Manitoba’s Provincial Coach, served as our official para-badminton coach.

Olivia Meier, a grade 11 student at Balmoral Hall who was classified into the standing lower category at National Championships, is more used to competing in local and national badminton tournaments with athletes who are considered “able bodied”.  Never to raise an eyebrow to this fact, most people wouldn’t even notice her disadvantage because she has been going about her business the last 5 years racking up more than 7 junior provincial badminton titles, and most recently winning the silver medal in Girls Doubles at the MHSAA Provincial Badminton Championships with her younger sister Claire Meier.

Olivia lost to Pascal Lapointe from Montreal QC in the final, earning her Silver Medal.  She also won Gold in the Exhibition Doubles event when she paired up with Cinnati Loi from Saskatchewan.

In 2014, the International Paralympic Committee announced that badminton (para-badminton) was selected as one of the sports for the 2020 Paralympics Games in Tokyo. “Badminton Canada has set the goal of winning a medal in Tokyo.” stated Cindy Bruce, chair of Badminton Canada’s Para Badminton Committee. “This championship was an important first step in reaching that goal. We look forward to building a world class program for our para-badminton athletes over the coming years.”

It came as an overwhelming surprise to Olivia when she heard that badminton was to be a part of the 2020 Tokyo Olympics, because for long she hadn’t imagined being a part of the Olympics would be a possibility, nor did she think that her disability could be considered such an ability.  Badminton players typically peak between the ages of 23 and 30, and Olivia would be getting to the age of 20 by the time those Olympics roll around.  That being said the Para-Badminton scene is fresh, and any country has an opportunity to become a powerhouse because we’re all starting at square one.

Provincial Coach Justin Friesen has been watching Olivia play for about 4 years now and had this to say about her new found opportunities, “Olivia is a bright, dedicated and talented young lady who can make it very far in Para-Badminton, as long as she sticks to her guns and keeps working the way she is now.  She may have to dedicate more time to the sport once she’s out of high school, but her opportunities will only grow with time”.  Justin has run one wheelchair badminton clinic in Winnipeg, and plans on developing other training sessions this upcoming 2016-17 season to spread the joy of the sport.

Para-Badminton is easily integrated into regular tournaments and programs by adjusting the lines of the court that are used, to minimize the boundaries of the playing area accordingly to the player’s assessed needs.  The Manitoba Badminton Association recognizes that they can immediately integrate para-athletes into their tournaments, however it’s the awareness of this opportunity that needs to grow.

Badminton Manitoba Executive Director Ryan Giesbrecht pointed out that, “Not only would new incoming para-athletes have to become comfortable joining the tournaments and playing with all the able bodied athletes, but the able bodied athletes have to used to playing against para-athletes and their adjusted court dimensions.  In time it’s easily integrated, however any change will always require a buffer zone.”  Badminton Manitoba hopes to start integrating para-athletes into their programs and tournaments starting this summer with their summer badminton camps held at the Winnipeg Winter Club, which is just being renovated to be wheelchair friendly.

Jo-Anne Peltz, a mother of a former nationally competitive badminton player and physiotherapist at St Boniface Hospital, has taken it upon herself with the support of Badminton Manitoba to become a certified assessor for Para-Badminton athletes.  Not anybody can do this, in fact only Physiotherapists, Medical Doctors and Chiropractors are capable of taking the training, and we are so lucky in Manitoba to have a great ambassador as Jo-Anne to be our local assessor. 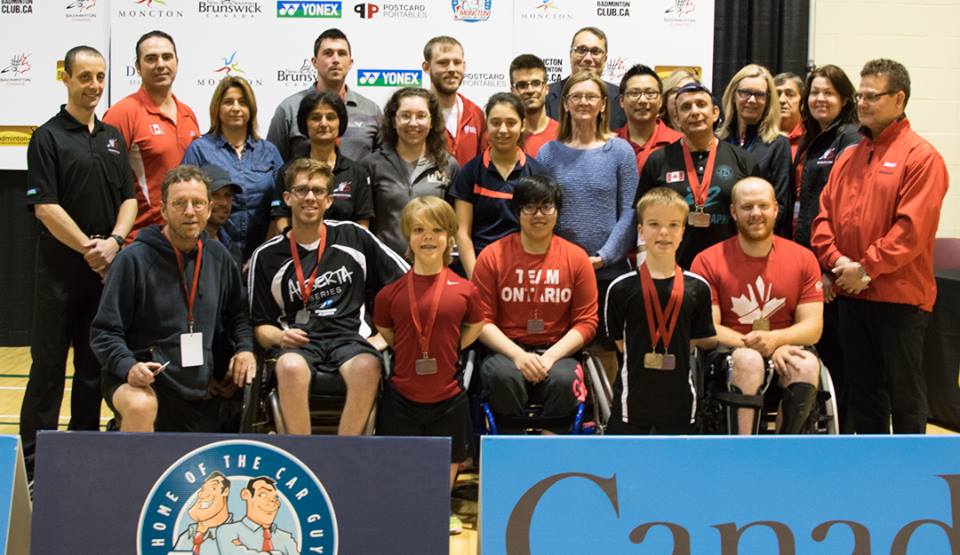