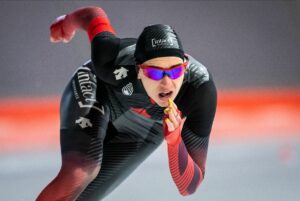 CALGARY, ALBERTA – The first day of the 2021 Canadian Long Track Championships presented by Intact Insurance crowned four athletes with the inaugural titles of the 2021-22 season – Brooklyn McDougall in the women’s 500m, Laurent Dubreuil in the men’s 500m, Isabelle Weidemann as women’s 3000m champion and Ted-Jan Bloemen in the men’s 5000m.

McDougall made the most of the first national-level competition at the Olympic Oval in her hometown of Calgary since February 2020, skating a time of 37.851 to come out on top of the field. While Marsha Hudey (White City, SK) crossed the line in a matching time as displayed on the scoreboard, the photo finish result showed her a mere five thousandths of a second behind (37.856). Kaylin Irvine (Calgary, AB) rounded out the podium with a time of 37.93.

As the reigning 500m World Champion, Dubreuil (Lévis, QC) did not disappoint in the opening men’s distance of the Canadian event. He finished the race in 34.12 – only one hundredth of a second off his personal best – to bring home the title. Calgary native Gilmore Junio took second position in the race (34.59) while Québec’s Cédrick Brunet beat out a crowded field of veteran skaters to claim the bronze medal (34.97).

In the women’s 3000m, Weidemann (Ottawa, ON) completed seven and a half laps of the 400m oval in a time of 3:56.89. She was joined on the podium by her partners last season in the Team Pursuit event, fellow Ottawan Ivanie Blondin (3:59.99) and Valérie Maltais of Saguenay, QC (4:01.23). The three will prove to be a medal threat when their talents are combined on the World Cup circuit this year.

The day concluded with a feat of endurance by the men’s long-distance specialists. The 5000m race is half the length of tomorrow’s most grueling event and one in which newly crowned Canadian Champion Ted-Jan Bloemen (Calgary, AB) excels. He crossed the finish line in 6:06.69 after completing twelve and a half laps. The next fastest times came from Graeme Fish (6:13.31) of Moose Jaw, SK and Toronto’s Jordan Belchos (6:18.94).

The five-day competition continues tomorrow with the women’s 5000m and men’s 10,000m. The races will be live streamed on Speed Skating Canada’s YouTube channel and Facebook page starting at 4:00PM MT.

I’m really excited to be Canadian Champion. It was a good race today and that makes me stoked for the rest of the season. I’ve gained a lot of experience on the World Cup circuit and am now better at performing under pressure. I’m looking forward to bringing what I’ve learned to the upcoming Olympic Games.”

“I’ve been skating really well in training the last month and feeling good all summer. I think I had it in me to be a couple of tenths [of a second] faster today, but the execution wasn’t perfect. It was so close to my personal best even while not feeling great, so that is encouraging. I am building off every year and think that when I’m at my best, I can be the best in the world.”

Right now, I’m still a little bit overwhelmed by the race and am so happy that I was able to put that together and race as fast as I did. My motto going forward is to keep it simple and skate the way I know how to skate. This will be my first experience on the World Cup circuit so I am looking forward to learning from my teammates and the veterans on our team.”