Golf Ontario – CAMBRIDGE— The second round of the Ontario Peewee Championship looked like it was going to be a repeat of the first with more beautiful conditions at Puslinch Lake Golf Course on Aug. 1. However, early in the afternoon a storm moved in and what was originally predicted to be a short delay, brought the players in for two hours. When the round did resume it was Cambridge’s Andreas Diogenous and Ottawa’s Isabella Ferguson who were crowned champions.

The hometown advantage proved to be enough for Diogenous. The Whistle Bear Golf Club member entered the final round with a share of the lead after posting a one-under (71) in the first round. He would better himself on the second day with an impressive five-under (67) to drop to six-under (138) for the tournament.

After the win, Diogenous spoke about what part of his game helped to lift him to his impressive final round. “I would have to say my putting. I probably made half of the putts I had on the front nine and made a few 30-footers. All of my putts under 10-feet went straight in, so that was good.”

Second spot went to the other co-leader from round one, Markham’s Kevin Lee. Lee, from Station Creek Golf Club, also had a solid second round. He was two-under at the turn and after an even back nine he finished the day two-under (70). That brought Lee to three-under (141) for the championship.

Rounding out the podium was Renfrew’s Carter Jarrett. The Renfrew Golf Club member also had an under-par second round finishing at one-under (71). That, combined with his three-over (75) opening round, moved him to two-over (146) for the tournament.

Ferguson, from eQuinelle Golf Club, entered the day with a share of the lead thanks to her opening round of four-over (76).  Ferguson began the round well with four straight pars. She went on to make the turn at three-over. After a bogey on 11, Ferguson would drain her only birdie of the round on the 12th. That turned out to be critical, as she would finish the round at seven-over (79) to bring her tournament total to 11-over (155), which gave her the title by a single stroke.

One-shot back was Hornby’s Annika Naumovski. Naumovski, a Brampton Golf Club member, started the day with a share of first thanks to her opening round of four-over (76). She had a good start to the day with a birdie on the third hole but the difference was a double bogey on the ninth. She was even with Ferguson at the turn at three-over but finished the back nine five-over and ended the day eight-over (80). That brought her to 12-over (156) for the championship and earned her the silver medal.

Picking up the bronze was Nepean’s Lauren Gervais. Gervais began the day in fourth after a 12-over (84) opening round. Her second round was highlighted by an eagle on the third hole. She went on to finish six-over (78) bringing her to 18-over (162) for the two days. 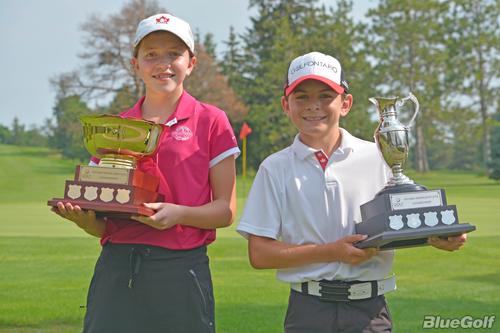 About the Ontario Peewee Championship

The Ontario Peewee Championship made its debut in 2015. The championship is hosted by the Puslinch Lake Golf Course, which has a history with Golf Ontario, hosting the Ontario Bantam Championship from 1999 to 2012.  The tournament is open to males and females who are younger than 13 years of age as of Aug. 1.