Volleyball Canada – EDMONTON, Canada, January 10, 2016 – Cuba won the NORCECA Men’s Volleyball  Olympic Qualification Tournament and the ticket to the Rio de Janeiro Games by defeating Canada with a surprising 3-0 (25-15, 25-21, 25-21) score in front of a full house at the Saville Community Sports Centre in Edmonton on Sunday night.

The strong serves and solid blocking were the key factors for the victory of a Cuban team that was in command of the actions from start to finish.

Gordon Perrin finished with 12 points as the leading scorer for Canada. 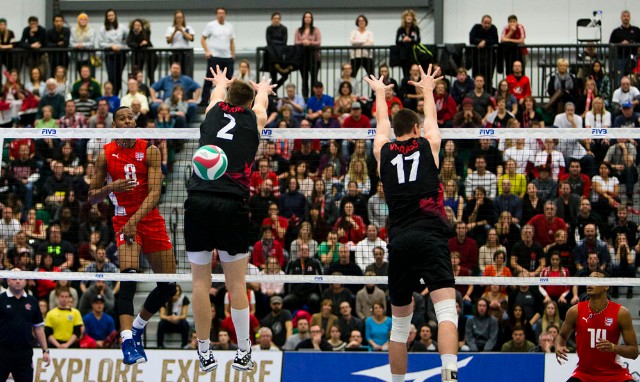 The 15th world-ranked Cuba outscored the number 10-ranked Canada 35-26 in kills, 7-4 in blocks and 8-6 in serving aces. The winners committed 21 unforced errors to 25 by the home team.

“They started by putting a lot of pressure on us with their serve, and we had to stay with them but we made crucial hitting errors at the beginning of the match,” said Canada’s coach Glenn Hoag. “That created an imbalance at the beginning of the match. We had nine unforced errors and they pulled away. We were able to catch up, and balance our serve receive, and we managed to get ahead, but for some reason we kept hitting balls out at crucial moments. At this level, you just can’t do that. Our side out game just wasn’t going tonight. Cuba has weaknesses and we can exploit them, but tonight we made too many mistakes.”

Canada had beat Cuba in the pre-qualifier, but it was a different story in Edmonton.

“We need to work on turning points. We don’t always have the most skilled players, so we need to play as a group. And we did that tonight; the problem was just too many unforced errors on attack. That was the difference. As a coach, you always look at why things didn’t work, and it’s my responsibility to prepare these guys and obviously I didn’t do a good enough job,” explained Hoag.

As the second place team in the competition, Canada will have another chance to earn a ticket to Rio at the World Olympic Qualification Tournament in Japan next May.

Canada’s captain Fred Winters: “We have to forget about this one as quick as we can, go back to our club teams, finish strong and then regroup for another run at Rio.”

Rolando Cepeda, Cuba’s captain: “It was about time. In 2012 we lost the chance in a five-set match with Germany. We went out looking for this victory. Winning the first match 3-0 gave us a boost in our confidence. We had suffered many losses to the Canadians and it is the first time we get a win like this against them. It is a new beginning for the Cuban volleyball and I think we have a team for the years to come. I am super happy and really don’t have good words to express myself and my feelings in this moment.”

Rodolfo Sanchez, coach of Cuba: “I feel very, very happy, extremely happy. We were facing a strong rival but we prepared for them and studied very well to get this important victory. Our serves and blocks were fundamental for us. To qualify for the Olympic Games is really important for the Cuban volleyball and I am extremely pleased with the performance of the boys.”

With reports from NORCECA. Photo by Kevin Light