BC RugbyVancouver, BC – June 4, 2016:  The Canadian Direct Insurance Bears were slow off the mark and fell behind quickly to England Counties.

A stabilizing scrum helped the Bears to a better showing in the second half, but in the end the home team found themselves shutout on the scoreboard through 80 minutes, falling by a score of 41-0.

England Counties put the Bears backfield under pressure early, with Counties centre Chris May charging down an attempted clearance kick to score his first of two tries on the day.

The pace of the Counties runners caused continued headaches for the Bears, who were lucky to not concede more points in the early stages, as knock-ons spoiled some flashy lines cut by the Counties backs.

The Bears found themselves trailing 27-0 at the half, as Counties were able to exploit gaps in the Bears defence by recycling the ball quickly and spreading the attack to the wings. Bears possessions in reply were marked with too many turnovers in the contact and not enough in the way of variation with ball in hand. When the Bears did move forward, the English counter ruck was often able to cause disruption, making clean ball all but impossible for the Bears, whose wingers were unable get the touches they needed to open up the defence.

The second half looked better for the Bears, with Andrew Lackner coming on at hooker and Cody Rockson being inserted as scrum-half to add some energy to the Bears attack. The last twenty minutes saw  the home side win individual battles with more consistency, and despite not scoring points, the Bears had moments that will make fans hopeful for the domestic season to come.

“This was a great testing match to help us get ready for the Canadian Rugby Championship,” said Bears prop, Ryan Ackerman. “The physicality definitely stepped up in the second half for us and we started winning more ball.”

Eighteen year-old eight-man, Taitusi Vikilani, playing in his debut for the BC senior men’s team, struggled at times in the first half, but grew in confidence as the second half went on, showing a tantalizing glimpse of what the future might look like for the promising prospect. Vikilani was a late addition into the starting lineup as replacement for Glenn McKinnon, who missed the game with an upper body injury.

Despite controlling much of the game against BC, England Counties fullback Matt Shepherd saw that there remains plenty of room for his side to raise level of play for the remainder of the tour.

The Bears then conclude the 2016 CRC campaign with away fixtures against the Atlantic Rock in St. John’s, NL, on July 21, followed by the Ontario Blues in Toronto on July 24.

Additional images for web or print available by contacting: 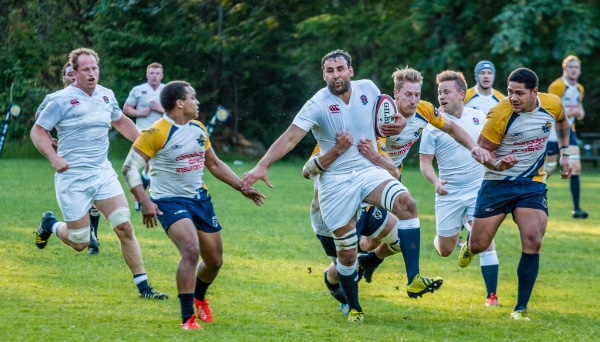