IVREA, ITALY (June 3, 2016) – Cameron Smedley opened the first ICF Canoe Slalom World Cup in Ivrea, Italy with a fourth place overall result in the preliminary heat of the Men’s C1. His impressive result today shows his potential to contend among a competitive international field. Tomorrow he will race the semi-final in the morning and a top-ten result will put him through to the afternoon final. Smedley’s top World Cup result to date has been a ninth place finish in a final in 2012.

Smedley (Dunrobin, ON) is the Canadian front-runner to qualify for the Olympic Team in his event. Four Canadian athletes are competing at World Cup 1. For those in Olympic contention in Men’s C1 and Men’s K1, this is just a warm-up. Only the results of World Cups 2 and 3 will affect the point tally for Canada’s Olympic Team selections. 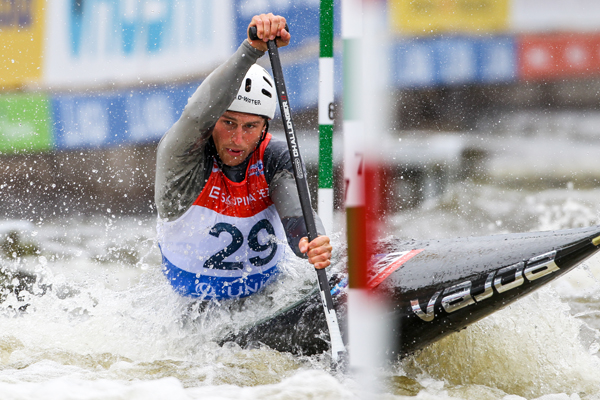 Groeneveld through to semi-finals in Women’s K1

Jessica Groeneveld (Innisfail, AB) had a 25th place result in the heats of Women’s K1 to earn a spot in tomorrow’s semi-final. Groeneveld made several World Cup semi-finals last season and will attempt to make tomorrow’s final with a top-ten result.

Haley Daniels (Calgary, AB) was 26th in the heats for Women’s C1. A top-twenty result was needed to advance to the semi-finals. Ben Hayward ranked 52nd in Men’s K1 and did not advance. Hayward is one of three Men’s K1 athletes still in contention for the Olympic spot along with Michael Tayler (Ottawa, ON) and John Hastings (Aurora, ON).

Tomorrow’s finals will be webcast on CBC’s digital platforms including the CBC Sports app and cbcsports.ca. CBC Sports is the Official Broadcast Partner of Canoe Kayak Canada.

CBC webcast times – watch online at cbcsports.ca or via the CBC Sports app.