Golf Ontario – UXBRIDGE/WATERLOO — The first 2016 Golf Ontario junior event came to a close on May 23, as the Investors Group Junior Boys’ and Girls’ Spring Classics wrapped up after three days of great golf. In the end, Peyton Callens and Ellie Szeryk outlasted the competition at Wooden Sticks Golf Club and Grey Silo Golf Course, respectively, to hoist the championship trophies.

Entering the day, Langton’s Peyton Callens had a two-shot lead. The Delhi Golf & Country Club member had played some consistent golf throughout the weekend and the final round would be no different. Back-to-back birdies on the fourth and fifth holes helped him finish the front nine at one-under. That would be key for the Team Ontario member as he was one-over on the back nine. Still, the 16-year-old’s even-par (72) was good enough to hold off the field as he capped off the week at four-under (71-69-72-212) earning the championship. Callens also took home the Juvenile title.

The consistent play definitely turned out to be the key factor as one player, Elmvale’s Andrew Nagel, from Barrie Country Club, was on fire. Nagel carded a six-under (66) to put the pressure on Callens. While his run would fall just short, Nagel picked up the silver at two-under for the tournament (77-71-66-214).

After the round, Callens spoke about the pressure he faced from his challengers. “Coming into today I was up by two on John (Burghardt) and didn’t quite know how he would play. It turned out that he ran into some trouble, but meanwhile Andrew (Nagel) was just hitting everything. He was three-under at one point while I was two-under so I knew I just had to keep playing my best. My lead was only three shots at one point and in golf a three-shot lead is really nothing. I started to put some distance on the back nine and that’s when I started to feel good. I knew if I just stayed calm, played well, hit good shots, hit fairways and greens I would be able to pull it out.” 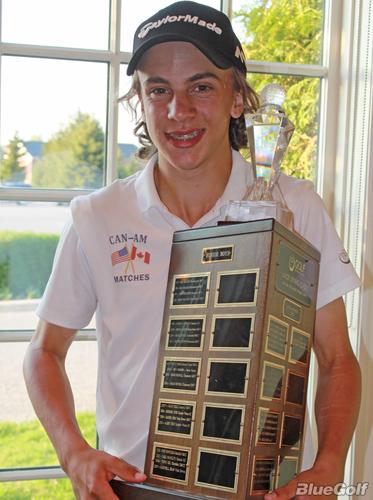 For full tournament information, including the final leaderboard see the tournament site at: https://gao.bluegolf.com/bluegolf/gao16/event/gao162/index.htm

The final round for the girls at Grey Silo looked like it would be anything but dramatic. Port Credit’s Chloe Currie entered the day at three-under and had a five-shot lead.  However, the Team Canada Development Squad and Mississaugua Golf & Country Club member got out to a rough start. She double bogeyed the first hole and bogeyed the second bringing her right back to the rest of the field. Her struggles continued on the back nine and she went on to finish the day five-over (76), brining her three-day total to two-over (68-71-76-215) good enough for a share of second.

Meanwhile, one of her playing partners was having a solid outing. Ellie Szeryk, a dual United States and Canadian citizen who plays out of London when in Ontario, began the day at one-over in a tie for second. After an even front nine, she finished one-under on the back for a final round of one-under (70). That was good enough to secure her the title as she ended the three rounds at even par (69-74-70-213).

“It feels amazing to win. It was a grind out there today, Chloe (Currie) and Monet (Chun) were really close, at one point I think there were about four players all pretty close to one another so I am so happy I could finish it off and pull out a win,” said Szeryk.

Szeryk credited her ball striking as the key element of her game that helped her capture the win. “My ball striking was really good, I put myself in good places. Of course I had some bad shots but I learned to recover and got over whatever happened.”

The win was the first provincial championship for the 14-year-old Szeryk.

The silver medal was also shared by three Team Ontario players who, in addition to Currie, all finished at two-over for the tournament. Hornby’s Alexandra Naumovski, from Brampton Golf Club, had the low round of the day finishing three-under (68). First-round leader London’s Isabella Portokalis, from West Haven Golf & Country Club finished one-over (72) as did Richmond Hill’s Monet Chun, from The Summit Golf & Country Club. 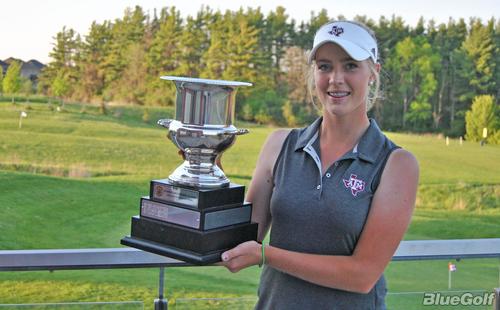 Full information, including the final leaderboard can be found on the tournament site at: https://gao.bluegolf.com/bluegolf/gao16/event/gao1618/index.htm

Golf Ontario would like to thank both Wooden Sticks and Grey Silo along with their staffs for hosting the events. Thanks also to the Golf Ontario volunteers and to title sponsor Investors Group for their continued support of golf in Ontario.

About the Investors Group Spring Classic

The Investors Group Junior Spring Classic is a 54-hole stroke-play competition contested annually over the Victoria Day long weekend that features many of Ontario’s best male and female junior golfers. The field of competitors gained entry to the competition through a qualifying process earlier in the season.

Golf Ontario is Ontario’s Provincial Sport Organization focused on enhancing participation, elevating performance and supporting the passion of golfers in Ontario. With over 100,000 individual members and 450 member clubs, Golf Ontario is one of the largest golf associations in the world.  From rating courses and keeping the integral rules of the game intact, to growing the game at the grassroots level and getting the game of golf into our school systems, to keeping the Ontario golf community aware of all relevant issues and hosting the best amateur tournaments in Canada, Golf Ontario is a passionate group dedicated to making golf better for everyone in Ontario. We share a love and passion for golf, while preserving its past, fostering its future, and championing golf’s best interests for everyone who enjoys the sport.