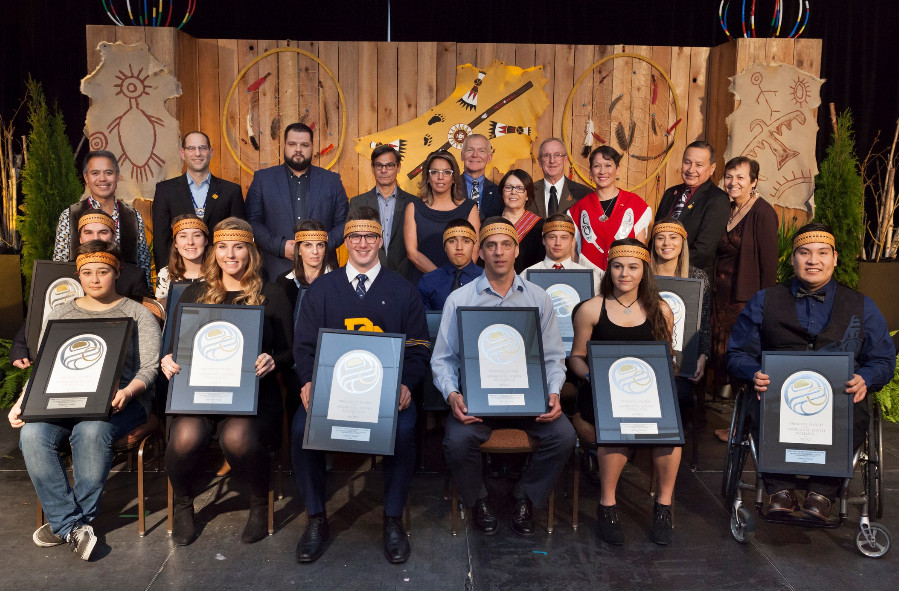 Kelowna, B.C. (March 21, 2017) – The 2016 Premier’s Awards for Aboriginal Youth Excellence in Sport were presented this evening to twelve outstanding Aboriginal youth athletes from British Columbia. The awards were presented by Gordon Hogg, Parliamentary Secretary for Youth Sport, during a formal celebration held during the opening ceremonies of the Gathering Our Voices Youth Conference at the Delta Grand Okanagan Resort and Conference Centre in Kelowna, B.C.

The Indigenous Sport, Physical Activity & Recreation Council (I·SPARC), in collaboration with the Government of British Columbia, created the Premier’s Awards for Aboriginal Youth Excellence in Sport to highlight the incredible achievements of Aboriginal youth athletes in the province. The second-annual awards honour Aboriginal athletes under 25 years of age who have achieved excellence in performance sport, are regarded for their leadership qualities, are committed to a higher education, and are recognized as community role models both on and off the field.

From the 47 regional recipients selected in 2016, a total of 12 recipients (six male and six female) have been selected to receive the provincial award.

Premier Christy Clark –
“These awards recognize Aboriginal youth on and off the field – youth who are excelling in education, participating in sport and embracing their culture. Congratulations to all recipients and I look forward to watching you develop in your careers in the upcoming years.”

Peter Fassbender, Minister of Community, Sport and Cultural Development –
“It is important to recognize and celebrate the Aboriginal youth awarded tonight and all of the nominees. Sport has opened doors for these youth, connecting them to their communities, promoting healthy lifestyles and providing a source of fun. Congratulations to these athletes and I wish them many more successes in the future.”

Gordon Hogg, Parliamentary Secretary for Youth Sport to the Minister of Community, Sport and Cultural Development –
“To the 12 recipients recognized for their outstanding achievement in sport, I offer my congratulations. These young people are role models for our communities, our province and our country. I am truly inspired by each of their stories and I am honoured to be involved in the celebration of their accomplishments.”

Rick Brant, Executive Director, I·SPARC –
“These awards give us the opportunity to honour the achievements of twelve extraordinary Aboriginal youth athletes. But their performance on the field of play isn’t the only reason for us to celebrate. The way they have given back to their communities, their commitment to education, and demonstrated leadership are an inspiration to us all,”

About the Indigenous Sport, Physical Activity & Recreation Council
I·SPARC is a consortium of the BC Association of Aboriginal Friendship Centres, the First Nations Health Authority, and Métis Nation BC. As the stewards of BC’s Aboriginal Sport, Recreation and Physical Activity Strategy, I·SPARC works with First Nations, Métis Chartered Communities, Friendship Centres, schools and other sport and physical activity stakeholders to deliver community-based programs designed to promote active lifestyles and support the desire for transformative change in the health and well-being of Indigenous communities, families and individuals across B.C. For more information, please visit: www.isparc.ca.