Dustin, 29, attacked the first portion of the race and struggled a little in the middle section. “I know I can push a little more and compete with the best,” said Dustin. “ I would’ve been happier with a top 10 result but overall, this is a good first race for me to kick off the season.”

Erik Guay, 37, who announced his retirement this weekend, made a final tribute run just before the start of the race. Erik skied down the track wearing jeans, a belt bucket and his famous jean jacket bearing the Canadian Cowboys logo as a tribute to his fans and teammates. The crowd cheered him on and he received a standing ovation from the fans in the stands at the finish line. 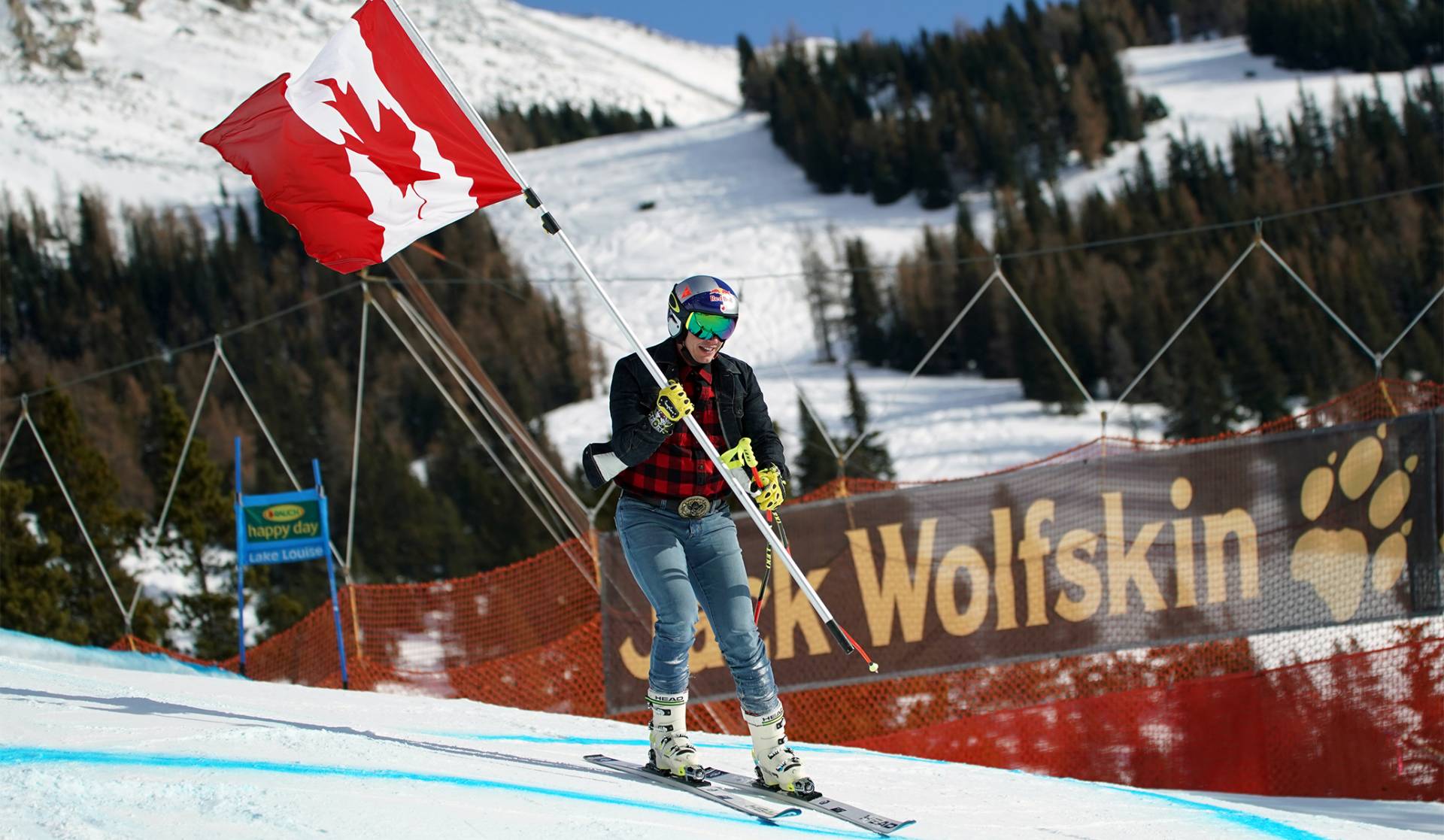 The Canadian speed team put in a strong showing with Jack Crawford finishing 27th, Benjamin Thomsen 47th, Jeff Read 49th and Brodie Seger 50th. Sam Mulligan hit a rut and his ski came off so he did not finish the race.

In Killington, Roni Remme, 22,  posted one of her best ever results with a 13thplace; as did St-Germain, 24, with her 14th place. St-Germain was only 0.01 second behind Remme and it was exciting to watch the second run as the two led the pack for much of the run. Veteran Erin Mielzynski missed a gate in the first run ending her chances for a spot in the second run. Amelia Smart, did not qualify for the second run.

Following on Marie-Michele Gagnon’s 13th place Saturday in the Giant Slalom, this is a very promising start to the season for the Canadian women’s technical team.

“It was an interesting and very challenging race today. The conditions were changing a lot and visibility was poor. It started as a disappointment for us to see Erin skiing very well at the top and then go out, she might have been destracted by the poor visibility that seemed like a fog wall ahead of her in that section. The skier before her went out at the exact same spot. But the other women stepped up. Laurence did very well considering the difficult conditions during both her runs. Roni was solid, enhanced her rhythm in the second run, we are happy to see two of our team members in the top 15.”-  Manuel Gamper, Women’s Head Coach.

Follow Alpine Canada on social media to get the latest about our athletes and more: Facebook,Twitter,Instagram, Youtube,www.alpinecanada.org

Alpine Canada is the governing body for alpine, para-alpine and ski cross racing in Canada, as well as for Canadian ski coaches, providing education, certification, insurance and compliance with the coaching code of conduct. With the support of valued corporate partners and donors, along with the Government of Canada, Own the Podium, the Canadian Olympic Committee and the Coaching Association of Canada, Alpine Canada develops Olympic, Paralympic, World Championship and World Cup athletes to stimulate visibility, inspiration and growth in the ski community. In 2020, Alpine Canada will celebrate 100 years of rich tradition in competitive skiing in Canada.

The world’s fastest skiers descend on Alberta at the end of November each year to compete at the Lake Louise Audi FIS Ski World Cup. Held in the heart of the majestic Rocky Mountains at Lake Louise Ski Resort, Canada’s highest-profile alpine ski race features the first men’s and ladies’ speed events of the Audi FIS Ski World Cup season. First hosted in 1980, the Lake Louise World Cup event is the first outside Europe to be named to the prestigious Club 5, an organization that brings together the most famousand historic World Cup alpine race organizing committees. The event has become synonymous with the start of the ski season each winter. It also represents the only opportunity male and female Canadian alpine skiers have to win a World Cup on home snow. For more information please visit lakelouiseworldcup.com.