U SPORTS – Team Canada added three medals to its total on Sunday, Day 9 of the Taipei Universiade, including its fourth gold medal, courtesy of shot put champion Brittany Crew.

Crew led from start to finish during the shot put event, registering a 17.74-metre throw on her first attempt. On her third attempt Crew reached the 18.00-metre mark and with the gold medal locked up before her final throw, she bettered her score with a throw of 18.34 metres.

“I knew that I had a really good chance winning this event and I knew that I had to get a really good throw out in the beginning (and) kind of shut down some girls,” said Crew. “This is my biggest medal I’ve got on the world stage so far. I’m super proud of myself and I’m really happy my coach got to be here to experience it with me. I can’t express the feelings I’m having right now.”

Crew is now a two-time Universiade medalist after winning the bronze medal in 2015 in Gwangju. 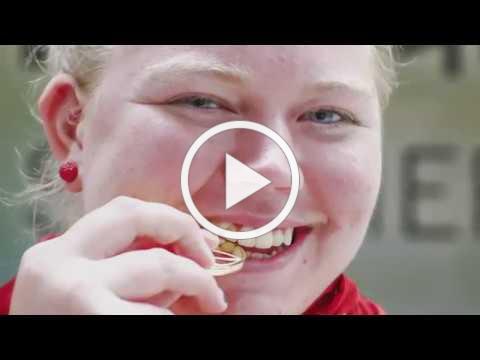 Jessica O’Connell also won a medal at Taipei Stadium tonight, finishing second in the 5,000m event. O’Connell was at the front of the pack for the majority of the final. Nearing the bell lap, she was in the pack of four front runners and a strong final 400m propelled her onto the podium. Gold went to Germany’s Hanna Klein but O’Connell held off a surging Jessica Judd from Great Britain to claim the silver medal.

“I knew there were two other very strong runners and it started out pretty slow so we were all controlled but I knew these two girls would pick it up near the end,” said O’Connell following the race. “I knew I had to keep contact and when they went, I had to go with them and that’s exactly what happened.”

In other action at Taipei Stadium on Sunday, the women’s heptathlon came to a close with Dallyssa Huggins and Nicole Oudenaarden both winning their 800m heats to round out the competition. Huggins finished sixth overall while Oudenaarden finished 11th. Sekou Kaba finished seventh in the 110m hurdles final while pole vaulter Deryk Theodore cleared 5.10 metres and finished 10th. In the 3,000m steeplechase, John Gay placed 11th. Also competing in the women’s shot put was Sarah Mitton who threw a personal best 16.32 metres and finished 10th. In the 4 x 400m relays, the Canadian men’s and women’s teams both finished third in their heat and qualified for the final on August 28.

Canadian divers were successful on the final day of diving competition, medaling in the mixed team event. This time it was Celina Toth and Tyler Henschel earning silver at the 29th Summer Universiade in Taipei. Ukraine took gold with 398.90 points, Canada finished with 362.80, while Germany won bronze with 353.15. Just 30 minutes before the mixed team events Henschel finished ninth in the men’s platform final, admitting that Toth had the team event on her mind more than him.

“It wasn’t even on my mind because the individual event is a little more stressful and focused on me,” said Henschel. “After that I had about a 30-minute break and then team event. And that’s the only time I actually went ‘Okay, we are going to compete.’”

This is the second medal at the games for Toth, who also won bronze in the women’s 10m platform event on August 23. In 2015 at the Summer Universiade she also won two medals (bronze in mixed team and gold in synchronized 10m).

“To come here with many people calling me the veteran, I kind of felt like I had the responsibility to come back (to the Universiade) and improve upon myself,” said Toth. “I did that in both events, so it’s just another step up. Everyone here (in Taipei) has been great. The volunteers have been awesome and the atmosphere at the diving has been an amazing intensity. I’ve had a blast.” 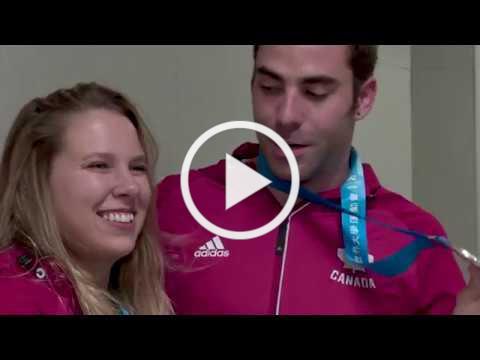 Canada’s men’s basketball team defeated the hosts, Chinese Taipei, by a score of 98-61 on Sunday afternoon. With the win, they move to the 9-12th place bracket and will play for a spot in the ninth-place game tomorrow at 3:00 a.m. Eastern time against the Czech Republic. Carleton Raven Kaza Kajami-Keane continued to lead the troops, scoring a game-high 25 points. U SPORTS Men’s Basketball Player of the Year Connor Wood followed that up with 15 points of his own.

Sandro Rajkovic was the hero for the Canadian men’s soccer team Sunday, scoring twice in the second half to lead his squad to a 2-1 win over South Africa. Rajkovic (Cape Breton University) first tied the game at the 68th minute before giving Canada the lead in the 86th minute on a penalty shot. The Canadians will play their last game of the Universiade Tuesday at 7:30 a.m Eastern time against Brazil, trying to capture the ninth position.

The women’s volleyball competition came to a close for Team Canada on Sunday with a 13th-place finish. The Canadians recorded a 3-0 (25-14, 25-15, 25-10) victory over Latvia in their final game at the Universiade. It was an efficient final game for Canada, winning the match in just 60 minutes. Alberta Panda teammates Meg Casault and Kacey Otto led the red and white with seven kills each.

Canada’s men’s water polo team advanced to the ninth-place game with a convincing 9-4 win over the Republic of Korea on Sunday at the Hsinchu Natatorium.

After a scoreless draw in the first quarter, the Canadians exploded for three goals in the second and third periods to take a 3-0 lead. Head coach Brian Parillo’s move to rest all but one starter backfired as Korea scored twice within a minute and a half to close the gap to one. With the starters back in, Sean Spooner scored twice in a row, turning to the net from the left post for a four-goal margin.

The teams traded pairs of goals in the final frame, Korea scoring twice in the first half of the quarter and Canada responding in kind in the final three minutes. Spooner and Reuel D’Souza led the way with hat-tricks. Devon Thumwood with a pair and Colin Colterjohn had the other goals.

“I wanted to rest the starters at that point in the second quarter, ” stated Parillo in reflecting on the two quick goals his team conceded. “Though we gave up a couple, our starters were much fresher for the rest of the game and they dominated when they were in. Also, both our goalies (Aleksa Stanic, Andrei Velasevic) had strong games.”

“I am starting to get my game rhythm and game speed back,” said Spooner, who has been off for more than a year with injuries. “I feel stronger in my legs each time out which certainly helped today when I had opportunities in heavy traffic in front of the net. I am really glad that we got the win so we can finish in the top 10.”

Canada will face the United States (8-4 winners over Australia) on Tuesday, August 29 at 1:30 a.m. Eastern time to determine ninth and 10th.

Mother Nature abruptly ended the fourth round at the Sunrise Golf Club on Sunday. Delays due to lightning caused some teams to not be able to complete their 18 holes before darkness. It was therefore decided that today’s results would not be counted, and that the ranking at the end of the third round would determine the medal winners. Canada finished eighth overall in men’s and 13th in women’s. Austin Ryan was the best performer during the Universiade with a score of +1, good for the 18th position. Mu Li led the women with a 31st place.

In table tennis doubles action, both the men’s and women’s teams were defeated by hometown Chinese Taipei teams in the 1/16 finals. James Pintea and Yen Chun Lu lost a heartbreaker 3-2, while Michelle Liaw and Anqi Luo dropped their match 3-1. Singles action continues tomorrow. 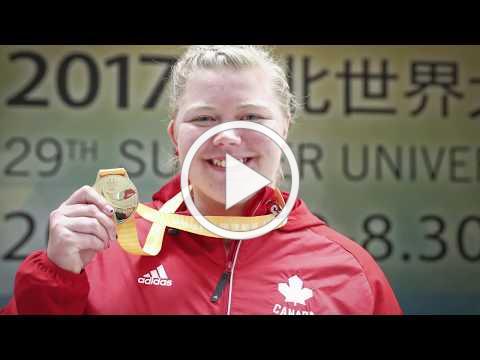