The Canadian women’s soccer team gave their all Thursday night but suffered a tough loss against Brazil with a score of 1-0 in the quarterfinal round of the 29th Universiade in Taipei 2017. A penalty shot in the 68th minute was the decider in this encounter. Despite some good chances for Canada, Brazil dominated the game in terms of ball possession (68 per cent) and shots, 10-3.

“I can’t ask for anything more than what these girls gave us today,” said head coach Peyvand Mossavat. “We had a plan, stuck to the plan, had a ton of opportunities and defended like our life depended on it. Brazil had a great team – credit to them. This group has been amazing and today was one of the best games I’ve seen played by any of the girls I’ve coached at this level. I’m just proud of them.”

The Canadians were still in it at halftime, in large part thanks to their goalkeeper Sarah Dilling, who faced a whopping nine shots on goal, and stopped them all. Dilling made three stunning consecutive saves at the 43rd and 44th minute, stopping dangerous Brazilian shots that she deflected off the goal.

A hand ball in the penalty area allowed Carla Jessica Pereira Nunes to score a penalty shot in the 68th minute.

Disappointed by the result, Mossavat still sees a positive side to what happened tonight.

“The girls are showing that we can compete with other countries that have players that are part of national team programs. This game today is huge for U SPORTS and soccer at the Canadian collegiate level.”

Canada will not have the chance to improve the best performance in the country’s history, achieved at the last Universiade in Gwangju, South Korea, where it finished in fourth place. It will now face the Republic of Korea in classification round for the fifth position this Friday, August 26th at 7:30 a.m. Eastern time.

Team Canada’s men’s basketball team captured their third win of the tournament with a convincing 84-71 win over Japan on Thursday night. The win improves their record to 3-1, while Japan drops to 1-3. Connor Wood (Carleton Ravens) lead Canada in points with 19, followed up by Ravens teammate Kaza Kajami-Keane with 16. The men’s basketball team will finish pool play on Aug. 25 at 3:00 a.m. Eastern time when they face Germany, who has gone undefeated thus far at the 29th Summer Universiade. The game will determine which round of classification Team Canada qualifies for. 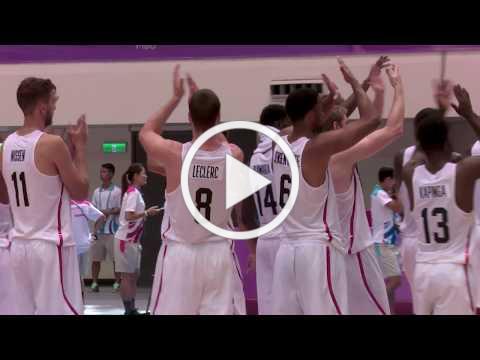 The Canadian men’s volleyball team ran into an efficient Argentina squad on Thursday afternoon and dropped a 3-0 (11-25, 17-25, 15-25) decision to see their record even at 2-2. Canada couldn’t solve the strong Argentine service game and was unable to create offence consistently. Cam Branch led the team with eight kills. The team finishes pool play on August 25 at 1:00 a.m. Eastern time when they face first place Iran.

In a high-scoring affair, the Canadians were edged 12-11 by Japan. Canada is now tied for third place in Pool A heading into the final pool play match against Great Britain on August 25 at 1:30 a.m. Eastern time. Elyse Lemay-Lavoie, Canada’s leading scorer in the tournament led her team again in the loss with five goals. Shae Fournier was the only other Canadian to score multiple goals.

“Japan is a smart team that knows how to play to their strengths. It was a tough loss as we had trouble adapting to their style of play today,” said Fournier. “We are mentally prepared to make some adjustments and come out strong in the remaining games.”

“Always tough to lose a well fought game in the last 10 seconds but this team is resilient and will bounce back tomorrow against Great Britain,” indicated Canada’s assistant coach, Cora Campbell.

On the track, a pair of 400m specialists qualified for their finals. Aiyanna Stiverne won her semifinal while Benjamin Ayesu Attah was second in his semifinal to advance. Those finals are set for August 25.

Decathlete James Turner (University of Toronto) had a strong first day of competition and enters day two in third place through five events. Turner won the first two events – the 100m and long jump – to jump ahead of his competitors but was sixth in shot put and twelfth in high jump. To round out the evening, Turner was second in the 400m.

With no medal potential at the pool on Thursday, the focus shifted to qualifying for Friday’s finals. Katerine Savard was the only Canadian to do so, finishing with the sixth fastest qualifying time to advance to the 200m freestyle final. Earlier in the day, Danica Ludlow placed second in her 800m freestyle heat but her time was not fast enough to advance.

In the second day of mixed team competition for badminton, the Canadians lost a heartbreaking match to Germany. Leading 2-1, the Germans won the final two games to take the match 3-2. The Canadians will now play in the 9-16 classification round.

Eloi Paradis Deschenes advanced to the men’s 74 Kg taekwondo Round of 16 today before losing to Iran’s Ramin Zadeh Hosseingholi.

The weightlifting competition came to a close for Canada on Thursday with a near-podium finish. Kristel Ngarlem placed fourth in the women’s 75 Kg ‘A’ final. Boady Santavy finished eighth in the men’s 94 Kg ‘A’ final while David Samayoa (second) and Alexandre Caza (fourth) faired well in the 105 Kg ‘B’ final.

Doubles action began in table tennis on Thursday including the men’s, women’s and mixed events. A pair of Canadian mixed teams reached the round of 32, while women’s pair Michelle Liaw and Anqi Luo and men’s pair Yen Lu and James Pintea won their openers and will continue competition on Friday. 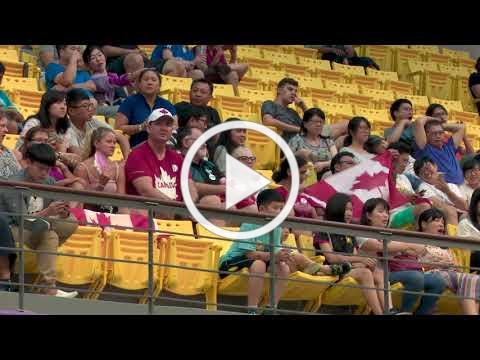