Cycling Canada  – September 10, 2017 – Canada concluded the Mountain Bike World Championships in Cairns, Australia, on Sunday, with a world championship title for Miranda Miller of Squamish, BC, in the Elite women’s category.  It is the first Elite Downhill world title for Canada since Cindy Devine won in 1990, the first year of the mountain bike world championships (and the year Miller was born).

The Elite women’s field suffered a blow when defending champion Rachel Atherton of Great Britain broke her collarbone in training.  However, this left the door open to a new world champion to be crowned, and it was Miranda Miller, having the ride of her career, who took the rainbow jersey.  Starting eighth from last, Miller had a clean run, and that proved to be the key when the favourites ran into problems.  World Cup champion Myriam Nicole of France won the silver medal and Tracey Hannah of Australia the bronze.  Vaea Verbeeck, Canada’s only other entrant in Elite women, finished 16th.

“It’s pretty crazy,” admitted Miller.  “I don’t think it has sunk in yet. I feel like I had some luck on my side, but I’ll take it. It’s pretty cool. I’m sure in a couple days it will feel a bit different. I thought Tahnee (Seagrave) was going to knock me out. But I had some luck on my side for sure. When Myriam (Nicole) came down I thought ‘Oh, this is real’.  For Canada, we haven’t had a [downhill] medal since Stevie [Smith, 2013] and Claire [Buchar, 2011], so it is cool. We got a medal in the Junior XC as well, so it’s great for Canada.”

Canada got off to a disappointing start for the day when defending Junior men’s champion and number one ranked Finnley Iles of Whistler, BC, crashed twice on his run to finish tenth. Matt Walker of Great Britain became the Junior men’s champion.  Other Canadian Junior results were Kendall Mclean in 23rd, Ben Wallace in 25th, Jacob Stefiuk in 37th, Joshua Fultz-Veinotte in 41st, Anthony Poulson in 46th and Cole Mooney in 47th.

In the Elite men’s category, Canada’s top finisher was Samuel Thibault in 53rd, followed by Mark Wallace, ranked ninth but finishing a disappointing 54th after crashing near the bottom of the course. 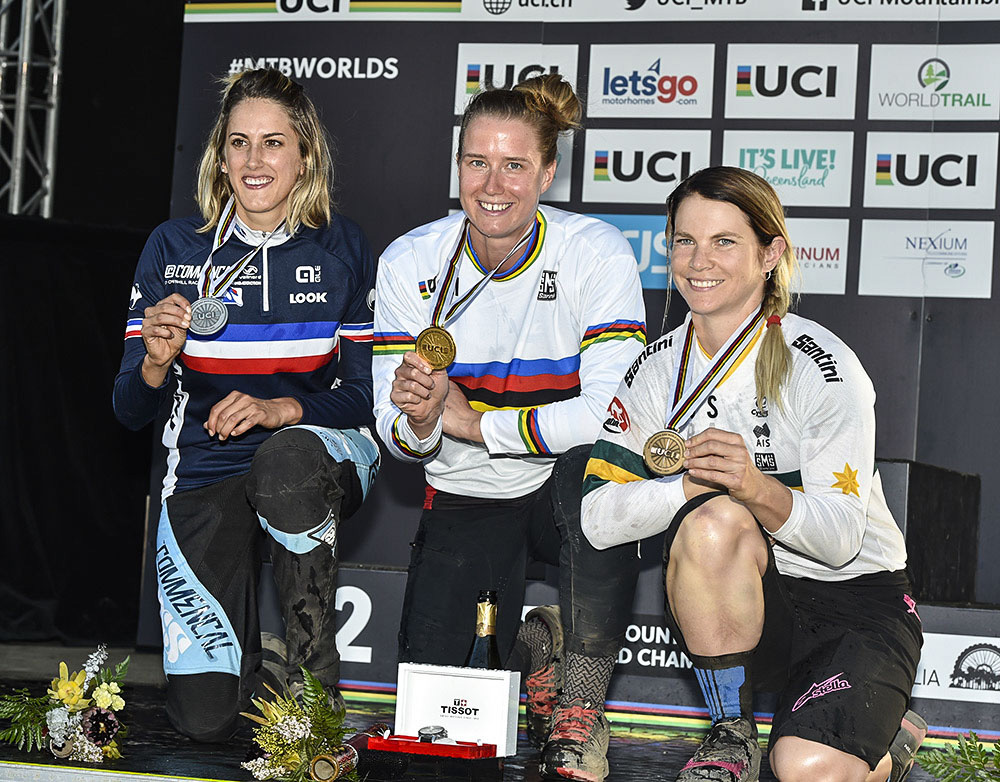